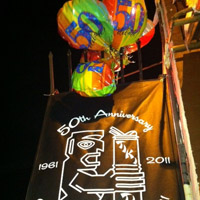 L.A.’s tiniest tiki bar celebrated their anniversary last night with a big 50th birthday party. The 12-stool Tiki Ti in Silver Lake was as crammed with customers as it was with tropical decor and artifacts from the Buhen family that has operated it since day one. You could smell the Citronella oil from the extra torches and the cigar smoke from the anniversary cigars being handed out from a block away. The gentle rhythm of King Kukulele‘s ukulele was just slightly overwhelmed by the traffic howling down Sunset Boulevard. The lines to purchase a special commemorative mug designed by Sven Kirsten appeared by 3:30 and the crowd was still enthused when I took these snapshots sometime after midnight. Aloha!