Home Uncategorized This New 1920’s Mickey Mouse Movie Deserves To Be Seen In A... 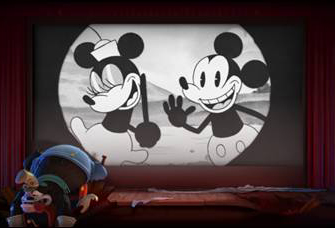 If you’re like me and walked in late to the movie Frozen, you missed a neato new 1920’s style Mickey Mouse short called Get A Horse. Those jazz age Disney characters were kinda nasty and goofy and really funny. You need to catch up with Clarabelle and Pegleg Pete, it’s been too long. I was able to outwit the guard at the multiplex and sneak back in, but you should do yourself a favor and go see the Oscar-nominated short in a proper movie palace this weekend. The El Capitan is screening a special sing-along version of Frozen, and house organist Rob Richards wrote a score and will be accompanying the silent era-ish film on the Mighty Wurlitzer. Isn’t that cool?