Home Uncategorized The Life of Buster Keaton Unfolds in “Stoneface” 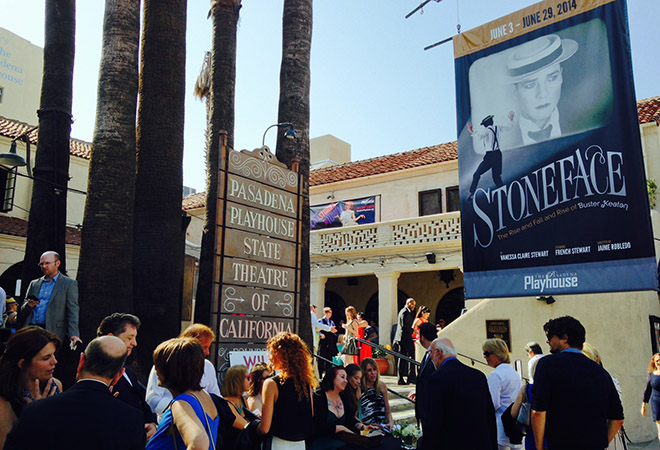 I was really moved by Vanessa Claire Stewart’s wonderful Louis & Keely Live at the Sahara a few years back at the Geffen Playhouse. The king of the Vegas lounge had a turbulent but little-known personal life, and the playwright mined it for theater gold. Stewart’s most recent production, Stoneface, opened this week at the Pasadena Playhouse and examines the life of Buster Keaton. Her husband French Stewart plays the acrobatic comedian in middle age, with Joe Fria portraying a younger version of the actor. At one point the two speak through the mirror to each other, and the psychedelic stagecraft begins. A bubbling deep-sea diver floats above the stage, actors morph in and out of a flickering black-and-white movie, and (spoiler alert) an entire house collapses around Stewart at the end of the first act – real genius stuff.

Most of the action revolves around Keaton’s alcoholism and its consequences. Lots of scary hospitals and quack cures, but the theme that haunted me throughout was the delicate ephemeral nature of memory. Life is momentary and fame even more so. When the movie star loses his mansion, he abandons his film archive; his kids grow up without him, his best friend Roscoe “Fatty” Arbuckle waxes about the chemical decomposition of celluloid. Nothing lasts forever and for some of us, that’s a fear greater than Thanatophobia.

The real Keaton enjoyed a weird go-go era comeback and has since been knighted, alongside Charlie Chaplin and Harold Lloyd, as silent comedy royalty. For $300 you can own a glamorous Blu-Ray collection of his films. Having said all that, I tried a test. At dinner after the show I asked a waiter if he had ever heard of Keaton. The college student thought about it for a moment, wrinkled his nose, and gave me a blank stare.

Stoneface is at the Pasadena Playhouse through June 29th.