Home Architecture The First Taco Bell Will Be Saved from Demolition! 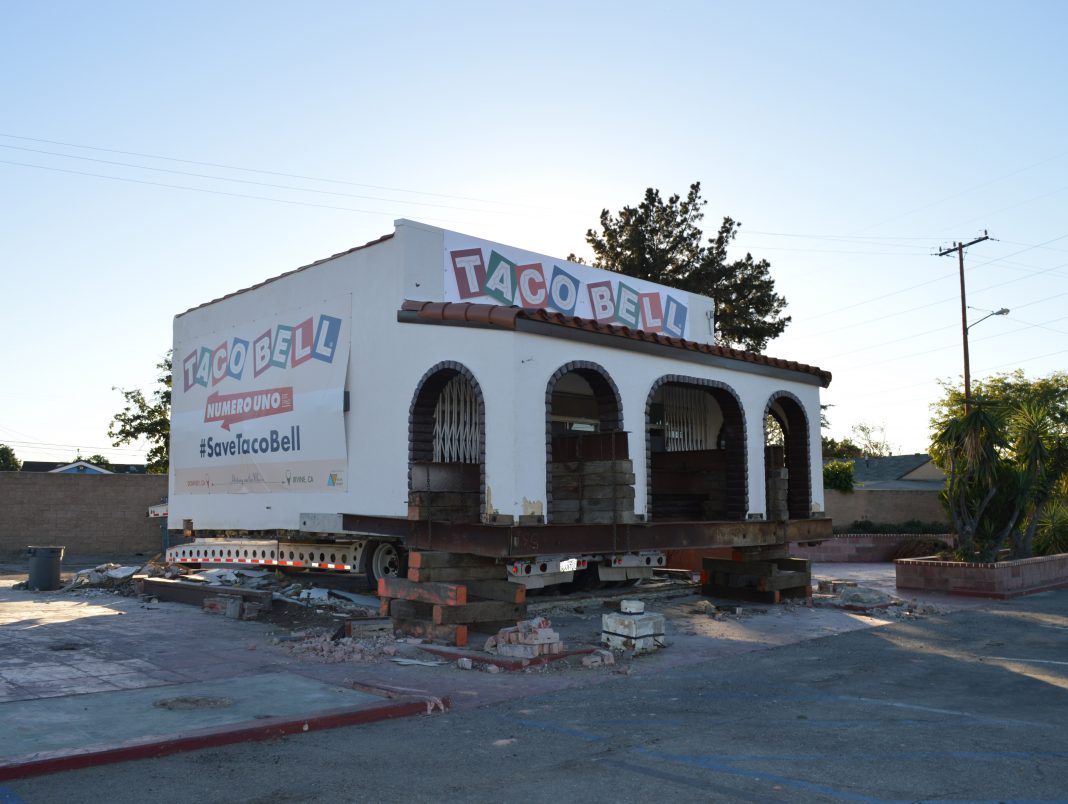 When executives at Taco Bell found out that the Downey building that housed their first restaurant was at risk of being demolished, they ordered the store “to go.” The birthplace of the Mexican fast food chain, located on Firestone Boulevard, is up on rails and ready to roll. Founder Glen Bell built the mission style building in 1962 and on Thursday night at 10:30, store “Numero Uno” will begin the 45-mile ride to company headquarters in Irvine. Taco Bell’s future plans for the structure remain under wraps.

Southern California was the birthplace of the fast food industry and Glen Bell’s menu made Mexican food popular across the country. The McDonald brothers opened their first stand in San Bernardino in 1948, and their techniques inspired Bell to open a burger stand of his own. He switched his menu to tacos in 1954 when he opened Taco Tia in nearby Rialto. Burger King, In-N-Out Burger, Del Taco, Carl’s Jr., Wienerschnitzel, Fatburger, and Jack in the Box, all have roots here, too. The world’s oldest McDonald’s, which is located in Downey, was restored in 1996.

The first Taco Bell building was originally envisioned as a village with shops, live music, and fire pits. Taco Bell closed the store in 1986. A succession of local taco shops have operated there since, but the owners of the property (who aren’t connected to the fast food chain) recently announced plans to redevelop the site. Those owners set a deadline of December 1 to clear the lot, causing the Downey Conservancy and non-profit We Are The Next to leap into action. The groups contacted Taco Bell to come up with a plan to save the building. “When we heard about the chance of it being demolished, we had to step in,” says Taco Bell CEO Brian Niccol. “We owe that to our fans. We owe that to Glen Bell.”

Like the space shuttle and the LACMA rock, the first Taco Bell will slowly roll through city streets in Downey, Norwalk, Cerritos, and through Orange County on its way to Irvine. The company has designated restaurants along the route “watch points,” where people can catch a glimpse of the eatery on the move. The journey will culminate with the landmark’s arrival at 1 Glen Bell Way in Irvine. Says Niccol, “To think a business like ours started with a walk a walk-up window no bigger than a two-car garage is truly inspirational.”