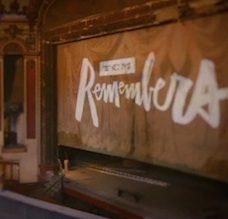 A recently released study from the Library of Congress reports that 70% of all American movies released before 1930 are gone and will never be seen again. Appreciation for classic films has come so far since the days when original negatives were tossed out or recycled for their silver content. Los Angeles is filled with amazing places to see old movies, and old movie stars, including the Turner Classic Movies Festival every spring. Last night, TCM premiered their annual homage to departed show business luminaries. This one is particularly poignant as it wanders around an abandoned Alabama movie palace putting out the lights and gathering up the images of stars like Esther Williams, Jonathan Winters, Annette Funicello, and Karen Black. The last Andrews Sister, critic Roger Ebert, and one of the last munchkins also made the reel. Grab your Kleenex box and click below.