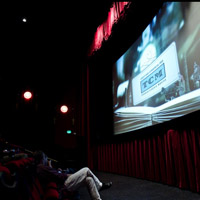 The first night of the TCM Classic Film Festival on Thursday was just as dreamy as anything in the movies. The lights and stars and eager fans outside the Chinese theater for the opening gala presentation of An American In Paris were phenomenal. People from all over the country come to Hollywood for this celebration of classic movies and for the chance to immerse themselves in movie history. Last night after a screening (poolside at the Roosevelt Hotel, no less!) of Elvis’ Girl Happy I found myself in the midst of a celebrity entourage. Elvis’ co-star Mary Ann Mobley and pompadoured musician Chris Isaak were posing for pictures and greeting fans. These unexpected moments really define this festival.The Blossom Room at the Roosevelt has been transformed into “Club TCM” complete with a dance floor and vintage poster exhibit and the Chinese 6 multiplex has an exhibition of costumes, photos and colorful displays all about movie musicals. This 2nd annual program is again hosted by TCM hosts Robert Osborne and Ben Mankiewicz, who themselves have wildly adoring fans. Though, I suspect the gang of reporters in wide ties and fedoras following them might have been on the payroll. Here are my picks (it’s so difficult to choose) for the remainder of the fest. See you on Hollywood Boulevard!