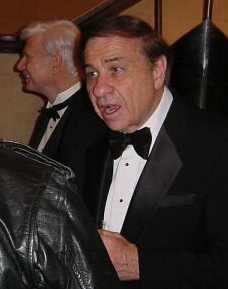 You might not know Richard Sherman’s name, but his music is unforgettable. He and his brother Robert were Walt Disney’s go-to guys for catchy melodies in the 1960s. The Academy and Grammy-award winning Sherman Brothers are stellar musicians and extraordinarily talented songwriters, but I really am warning you when I say you won’t be able to get this music out of your head. Ready? Sherman’s the guy that wrote It’s a Small World, The Tiki Tiki Tiki Room, Supercalifragilisticexpialidocious and dozens of memorable songs from films like Mary Poppins, Chitty Chitty Bang Bang and Bedknobs and Broomsticks. On Sunday evening, the 83-year-old composer makes a rare appearance at the El Capitan in Hollywood for a concert of his hits performed on the theater’s Mighty Wurlitzer, film clips and musical guests. When Jon Favreau wanted to evoke the spirit of the 1964 New York World’s Fair for Iron Man 2, he turned to Sherman for a new song inspired by his There’s A Great Big Beautiful Tomorrow. For me, it was the highlight of the movie. Go see Mr. Sherman, but remember you’ll be humming It’s a Small World the rest of the weekend.

Click here for tickets available through the El Capitan.