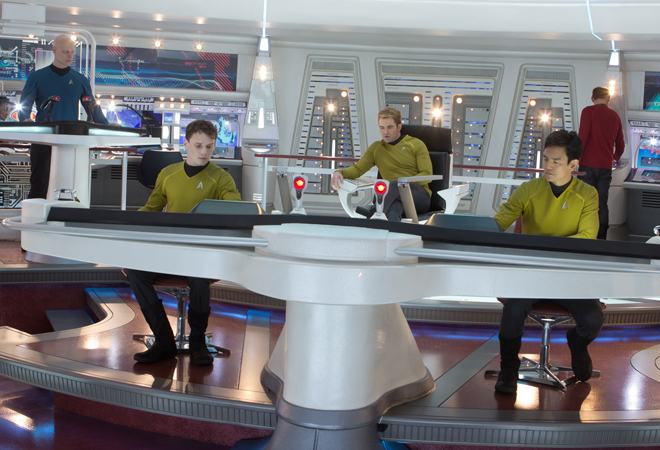 While I was in the theater waiting for Star Trek into Darkness to begin, I overheard a ten-year-old boy and his dad tell friends that they had just watched the entire run of the original series in preparation. I didn’t go that far, but I certainly recognized and enjoyed the multitude of callbacks to vintage Trek in this new film. I laughed, I cried, I clapped. The kid howled whenever Dr. McCoy cracked one of the classic “I’m a doctor, not a …” jokes. Aside from tribbles and Jefferies tubes, the other thing I was happy to recognize was our beautiful city standing in for San Francisco, circa 2259. I spoke to film’s location manager Steve Woroniecki (Iron Man II, Hangover III) about the process of finding the future in L.A.

“When you’re going to locations you look at hundreds and hundreds of files and we provide that to the production designer and the director. We were looking for clean white lines and factories to mimic the engine rooms on the Enterprise. We filmed at the Getty, near CAA in Century City, and the Crystal Cathedral, but obviously we can’t blow up the Getty so we did that on a stage. The whole J.J. (Abrams) concept is new and fresh. We didn’t even look at the old movies to see what happened before. They said ‘find me something architecturally pleasing that we can shoot multiple ways.’ Nobody said ‘show me everything Richard Meier ever designed.’”

Kirk and Scotty run through nearly 60-year old brewery in Van Nuys on their way to the warp core of the Enterprise.

Starfleet ‘s London-based archives are conveniently located right on Pershing Square in downtown Los Angeles. The elaborately detailed ceilings of this 1908 landmark are beautifully lit for the film.

The exterior of the Starfleet archive is a few blocks east in the Old Bank District. The 1927 Bank of America building was remade into the SB lofts in 2007.

Oil baron Edward Doheny built this 55-room mansion for his son in 1928, the city of Beverly Hills dedicated it as a city park in 1971, and 300 years from now, Starfleet will turn it into a hospital.

Spock beams down near the Annenberg Space for Photography, which occupies the vast plaza behind Creative Artists Agency in Century City, a glass box some  call the “death star.”

Chaos rains down on Bunker Hill as spectators watch a disaster unfold across several downtown buildings including Wells Fargo and California Plaza.