Home Uncategorized Space Brothers is Taking Over Cinefamily This Weekend 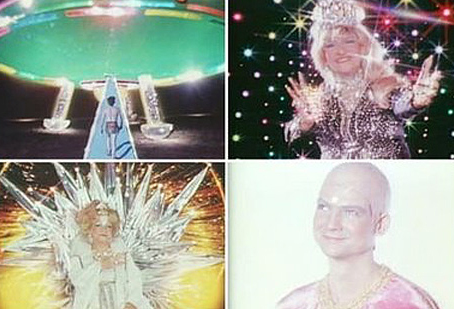 Welcome your space brothers to Cinefamily this weekend as the Unarius Society takes over the complex for a three-day celebration of the “interdimensional science of life.” The El Cajon-based UFO brotherhood will present, for the first time on the big screen, episodes of their far out 1970s and ’80s public access show featuring members re-enacting past lives on Earth and other planets. Founders Ernest and Ruth Norman created lavish costumes, props, and even a customized dove-releasing 1969 “Space Cad” Cadillac (all of which will be on display) to express their quest for spiritual healing through alien union.

The gathering is being planned in part by producer Jodi Wille, who’s documentary The Source Family reunited another group of spiritual explorers last year. Wille says the society’s films utilized “otherworldly costumes and makeup, guerilla location-filming techniques, elaborate sets and ingenious no-budget special effects” that are “some of the most mind-shattering, oddly uplifting gems of American outsider cinema.”