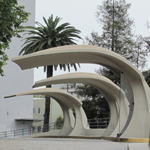 If you’ve ever visited LACMA or pumped gas at the 76 in Beverly Hills you’ve been to a William Pereira building. The architect came to Los Angeles in the 1930s with his production designer brother Hal. The two designed sets for films before William created landmarks like CBS Television City, the floating Geisel library at UC San Diego, and the Transamerica pyramid in San Francisco. By the time he was designing the master plan for Irvine, Pereira had made the cover of Time magazine. Alan Hess will shine some light on the career of this brilliant modernist tonight at the Los Feliz Library. See you there: