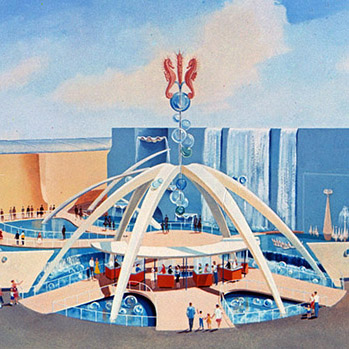 That wild-eyed sea serpent coaster! Those grinning Technicolor trees! A dark ride with exploding lava pods! The ideas are so far out that it’s almost impossible to believe that this wonderland was actually built in Santa Monica in 1958. It’s even harder to believe, certainly harder to accept, that it all came to an unceremonious end less than a decade later.

The attractions at the pier are all documented, including the fascinating music history, which stretches from Lawrence Welk to Pink Floyd playing the same ballroom, which was known as The Cheetahwhen POP’s run came to an end in 1967. These guys even make the spiral of failed comebacks that doomed the Disneyland also-ran a fascinating read.

The book is filled with tikis and robots and flying bubble cars, so basically the greatest achievements in the history of mankind. Enjoy a grand salute from King Neptune as Pacific Ocean Park is brought back to life in the pages of this terrific book.