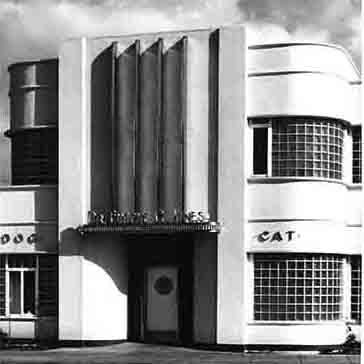 An extravagant Streamline Modern landmark on Santa Monica Boulevard that was built as a high tech animal hospital is set to be demolished for a new development and neighbors have organized to save it.

Architects Walter Wurdeman and Welton Becket designed the shiny steel and glass brick dog and cat hospital with an X-ray room, pool, garden, and roof deck in 1938. It’s a stunner, but it’s been hidden behind large street trees for decades so you may not have noticed it on the stretch of Route 66 where West Hollywood meets Beverly Hills, across from the Troubadour and Dan Tana’s.

West Hollywood city planners recently approved the “Melrose Triangle” development, which would replace the entire block between Doheny and Almont with more than a quarter million square feet of apartments, office space, and retail.

An Environmental Impact Report for the project indicates that the 1938 building is important enough to be a state landmark, and demolishing it would have a “significant adverse impact.” The city has overcame that unpleasantness by adopting a “statement of overriding considerations,” meaning that this new project is more important than saving the old building. Planners do not support integrating the buidling into the new project.

On their most recent “Preservation Report Card” the Los Angeles Conservancy gave the city of West Hollywood an “A” for their efforts at historic preservation. “In policy they’re good,” says Conservancy Director of Advocacy Adrian Scott Fine. “But in practice they’ve got some problems.”

The pets of Charlie Chaplin, Gloria Swanson, and Rudolph Valentino were all clients of Dr. Eugene C. Jones. Some of them visited his Santa Monica Boulevard animal hospital, others his Calabasas pet cemetery. Dr. Jones came to Los Angeles in 1924 and built one of the first (architect Welton Becket said the first) animal hospitals in Southern California. “He was a progressive veterinarian,” Dr. Norman “Lou” McBride told the Los Angeles Times a decade ago. “Who helped elevate the primitive dog and cat storefront business to a top-notch hospital.” Prior to World War I most vets were horse doctors, but new technology on streets and farms meant fewer horses, so dog and cat specialists boomed in the 1920s.

In 1938, Dr. Jones hired the architects of the Pan Pacific Auditorium on Beverly Boulevard, to expand and improve his hospital. The designers of that mammoth exposition hall utilized a similar style for the more modest hospital building. A central tower with shiny metal blades rose up between two flanking wings punctuated by glass brick that ran the length of the edifice. Rounded corners and horizontal trim highlighted the smooth lines.

The Pan Pacific was an instant landmark whose distinctive curved towers became an international icon of the style. After closing in 1975, and a cameo in the film Xanadu, it was destroyed by fire in 1989. Welton Becket and Associates would go on to design the Capitol Records building, the Cinerama Dome, and the Music Center. Much of their early work has been destroyed, including an epic Jai Alai stadium in Manila, whose demolition in 2000 sparked the National Cultural Heritage Act in the Philippines.

The demolition of the Edward Fickett-designed city library in 2011 and the current desire to take down the 1938 Great Hall at Plummer Park do not speak well for preservation efforts in West Hollywood. A Facebook page has appeared to help the effort. Will this be the next historic building to fall? The full City Council is expected to give final approval to the Melrose Triangle project at their regular meeting on July 21st.