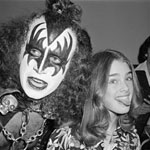 Photographer Brad Elterman was still a teenager when he cut school to stake out the Cherokee recording studio on Fairfax. A friend told him that David Bowie was finishing up an all-night session and Elterman parked himself near Bowie’s Mercedes and waited. When the singer emerged carrying master tapes, Elterman got the shot, and a cheerful “good morning!” beginning his career as a music photographer. More than 100 of his pictures are in the new book Dog Dance, out this week from Damiani. Rock out in the sleazy 70’s with Joan Jett at the fleabag Tropicana motel on Santa Monica Boulevard, Phil Spector flipping you off at the Magic Castle, and Debbie Harry backstage at the Whisky before her first L.A. show in 1977.