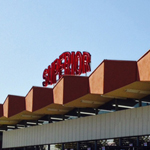 Highland Park’s vintage 60’s supermarket might be on its way out. Superior Market on Figueroa and Ave. 45 is a highly intact googie grocer that was up for city Historic-Cultural Monument status this week. The leafy neighborhood is home to the city’s largest historic district with over 4000 landmark buildings in a Historic Preservation Overlay Zone. Yesterday, Councilmember Gil Cedillo came out against the nomination, which had been supported by city staff, the Highland Park Heritage Trust and the Los Angeles Conservancy. If classic coffee shops like Pann’s and Norms are rare animals, intact mid-century supermarkets are googie Bigfoot. If they ever existed, they are now almost extinct. Nearly one thousand people signed a change.org petition urging the council office to save the market and keep it from being remodeled in the faux Craftsman style of the glamorous Food 4 Less a few blocks away, but the councilmember told Eastsider L.A. he was “unencumbered by the past.” His actions seem to have ironically doomed the sleek building to what looks like a Styrofoam beam and plastic rock makeover.