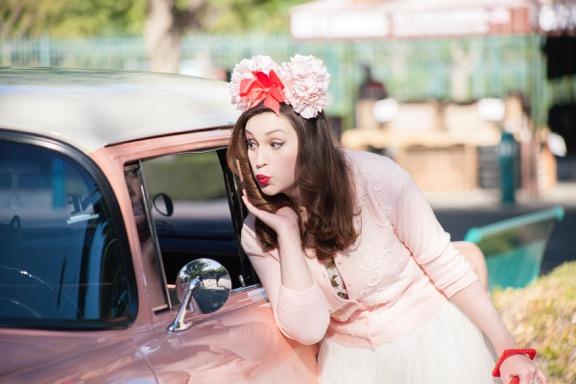 Dapper Day at Disneyland last weekend was a huge success. Judging from the tank tops and shorts that dominate the park 364 days a year who knew there was such a pent up demand for high style? I arrived as the park was closing early so my people watching was limited to the lobbies of the Grand Californian and the Disneyland Hotel where I enjoyed an endless parade of fashionable styles from the last 100 years. Girls in formal dresses and sneakers with back tattoos peeking out from behind straps, a fellow sporting a tank top under a double breasted blazer, and at the end of the night an exhausted woman whose bouffant hairdo was melting down as much as she was.

I spent the night at the glamorous Disneyland Hotel, recently remodeled to resemble a version of its 1950s self, and got up early to enjoy the Dapper Day Expo held in a hotel ballroom. Patrons strolled through the convention of style in arctic air conditioning enjoying the piped-in sounds of Pink Martini and other genteel music. Vintage dealers, beauty demos (I saw a woman squeal under a curling iron that she “wasn’t ready for all this”) and companies making new clothes inspired by the past filled the room. The Pinup Girl Clothing booth was the perfect melding of vintage, Disneyland, and high fashion with their gorgeous Mary Blair collection of skirts and dresses with flora and fauna prints created by the designer behind It’s a Small World. The hall had a bar, a swing orchestra, and a pomade parlor where stylists tousled freshly oiled hair near a shampoo display that promised to wash it all out. I picked up a dazzling hand-made tie clip from Meteor Jewelry Company. Visitors could have their likenesses captured at the orchard-themed photo station, by a sketch artist, or on metal at the Tintype Booth.

Outside in the parking lot was a car show where the rides ranged from a lowered El Camino to a dandy lavender Ruxton Roadster from the Petersen museum. Crowds waited in long lines at the adjacent AMC theater to see Charles Phoenix’s Retro Disneyland Slide Show. Phoenix spent years collecting other people’s vacation slides and the crowd ate up the images of bygone attractions like the Phantom Boats and the Chicken of the Sea pirate ship restaurant. “In the future, I hope every day is Dapper Day,” Phoenix told the crowd. “And they’ll have one day that’s schlub day.”