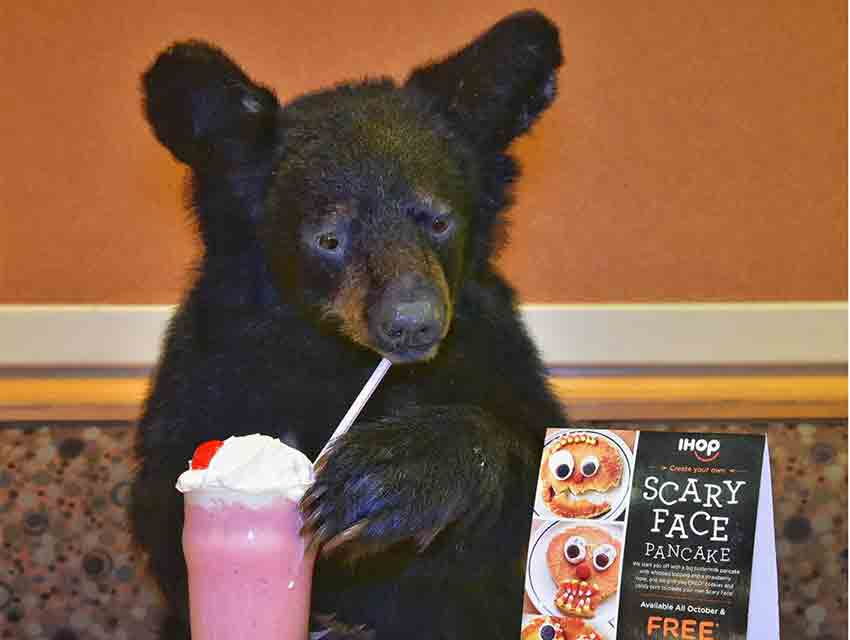 Paul Koudounaris is an Echo Park-based photographer, author, and lecturer with a thing for dead things. Sometimes he takes them out to breakfast. The bone historian has traveled the world studying the use of human remains in religious settings and published his findings in three art books: The Empire of Death, Heavenly Bodies, and Memento Mori. Now, he has invited members of his vast personal menagerie of taxidermy out to dine with him and created a series of cheerfully macabre photographs. “Yes, I really do walk into restaurants with taxidermy boars and anteaters,” Koudounaris told me. “I actually am that weird.”

The diner series was photographed mainly at the International House of Pancakes in Glassell Park, and Astro in Silver Lake. “I guess it was kind of a reaction to all of the food pictures people were posting on my Instagram feed,” Koudounaris said. “All these food pictures seemed so inane to me. So I started showing up at diners with bones and putting them on the food, then eventually it evolved to bringing taxidermy animals and having breakfast with them.”

The restaurants didn’t seem to mind at first. “The strangest thing that happened was at Astro,” Koudounaris said. “I was taking a picture with a taxidermy piglet and the waitress yells over at me, “hey, he’s got a dog on the table! No dogs are allowed in here!” And I had to yell back, “Are you crazy, it’s not a dog, it’s a pig! And he’s dead anyway, it’s OK!” She came over and looked at it, became completely confused and walked away.”

The photos have found a following through social media, but Koudounaris wants to publish them as a booklet and include a discount coupon for IHOP. “I sent a letter to their corporate office and asked them,” he said. “I even told them I would donate the money to a local animal rescue. No way, they wanted no part of it.”

At a different restaurant a child watched Koudounaris stuff a tarantula into his cheeseburger. By the time the kid’s parent returned the photo shoot was finished and the spider was put away. “The child grabbed his father, pointed at me, and yelled, “dad, there’s a tarantula in that guy’s burger!” I just sat there silently, and the child’s father admonished him to not “make up stories about strangers.”