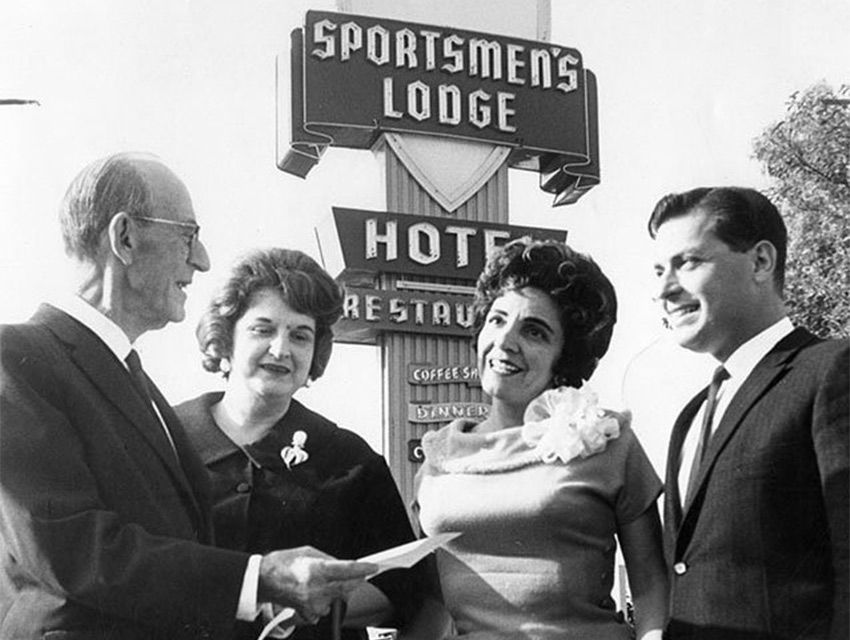 The Sportsmen’s Lodge has been part of Valley life since at least 1936 when it was a small roadside fishing attraction and Ventura Boulevard was Highway 101. Today it is a sprawling complex that includes a hotel, restaurants, and an events center. After more than 75 years it still features a small lake. The ponds were once stocked with trout that the restaurant would fry up for fishermen.

Through the 1940s and ’50s the Valley was filled with ranches and celebrity cowboys, and the place became a movie star hotspot and eventually the center of the archetypal baby boom community. When Kevin Roderick wrote the history of the San Fernando Valley, he called it “America’s Suburb.”

When a politician visited the Valley, a stop at Sportsmen’s Lodge was always on the agenda. When a charity needed a hall to raise funds, they turned to the Sportsmen’s Lodge. Whether it’s where they enjoyed a birthday party or a Sunday brunch, almost every Valleyite has a personal story about the place. “I told my husband we’ve got to save it,” a friend told me last week. “Even if just because he had his bar mitzvah there.”

A new development approved on Wednesday calls for demolishing the western half of the complex, including the events center, River Rock restaurant, the waterfall, ponds, and water features and replacing them with a nearly 100,000-square-foot shopping center including a large gym and five restaurants. The hotel was renovated in a mid-century style in 2013 and will remain in operation.

The City of Los Angeles “Survey L.A.” project identified the site as a historic resource at the city, state, and federal level in 2013. The experts were impressed by its cultural history as a recreation site and for its connections to the entertainment industry, but a more recent report by a private firm hired for the project found it to be ineligible for historic status.

The Los Angeles Conservancy meanwhile has not taken a position on the issue, and some citizen groups have felt left out of the planning process. “The neighbors never objected to this project,” says the group Our Studio City, “because they were not aware of it.” The city and developer agreed to add “two man-made lakes, connected by a stream” and a “plaque, monument, or display case commemorating the history of the Sportsmen’s Lodge.”