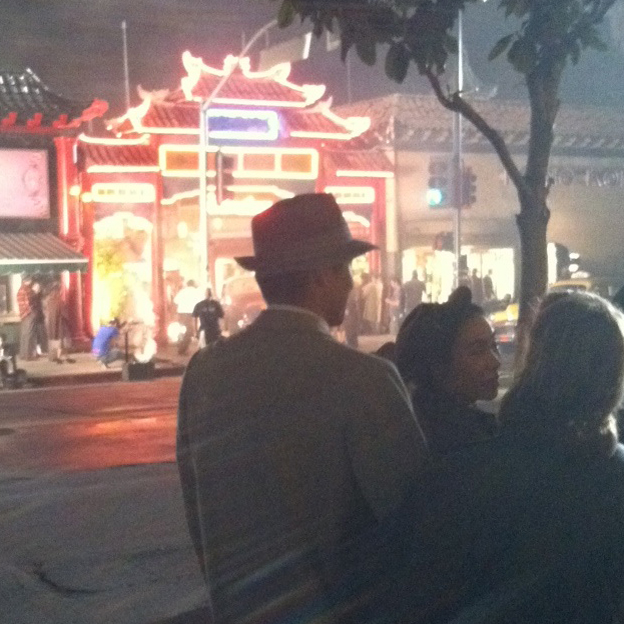 It was Christmas in Chinatown last week, Christmas of 1949, as a giant movie crew descended on the downtown neighborhood to reshoot scenes for Gangster Squad. The big budget crime picture was set for a September release when the Colorado Batman shooting echoed a scene in the film and producers pulled back. The trailer, which included a gunfight inside a packed Grauman’s Chinese theater, was removed from theaters and the WB website and an elaborate shootout was cut from the finished film. The original scene was an extraordinarily complex crime ballet that started backstage at the theater and ended in the middle of Hollywood Boulevard. Production designers built a stage, a new screen, and a new projection booth and filled in all the forecourt handprints left since the Truman era. A Pacific Electric car was installed on the Boulevard and American Apparel, Hooters and Coffee Bean were digitally replaced with the furriers and men’s shops that had once lined the street. The new scenes also seem to involve gunplay in a crowded area, only this time it’s in the Chinatown Plaza, which was extensively restored with new neon, vendor booths, signage and even new period-style storefronts. For a history nut like me it was a real thrill to see long-gone names reappear. Mountain Bar was once again Man Jen Low, the chop suey joint next to the K.G. Louie company was back – at least for a week. Every prop warehouse in town must have been emptied of lanterns and mid-century Christmas décor. The crew shot along Hill Street and in the plaza for four nights. Shopkeepers were asked to remain on site until well past dawn to keep an eye on their open stores.

While the production partially restored the Broadway gate and left behind some of their improvements, our nearly 75-year-old Chinatown Plaza could certainly use the money the production brought in. I hope some of it can be earmarked for the once glorious wishing well that has been parched and covered in green paint the last few years. I suggested to some of the folks running the show that maybe it could use a tip jar. I’m sure Sean Penn or Ryan Gosling would have slipped a couple ’40s-era bucks in it.