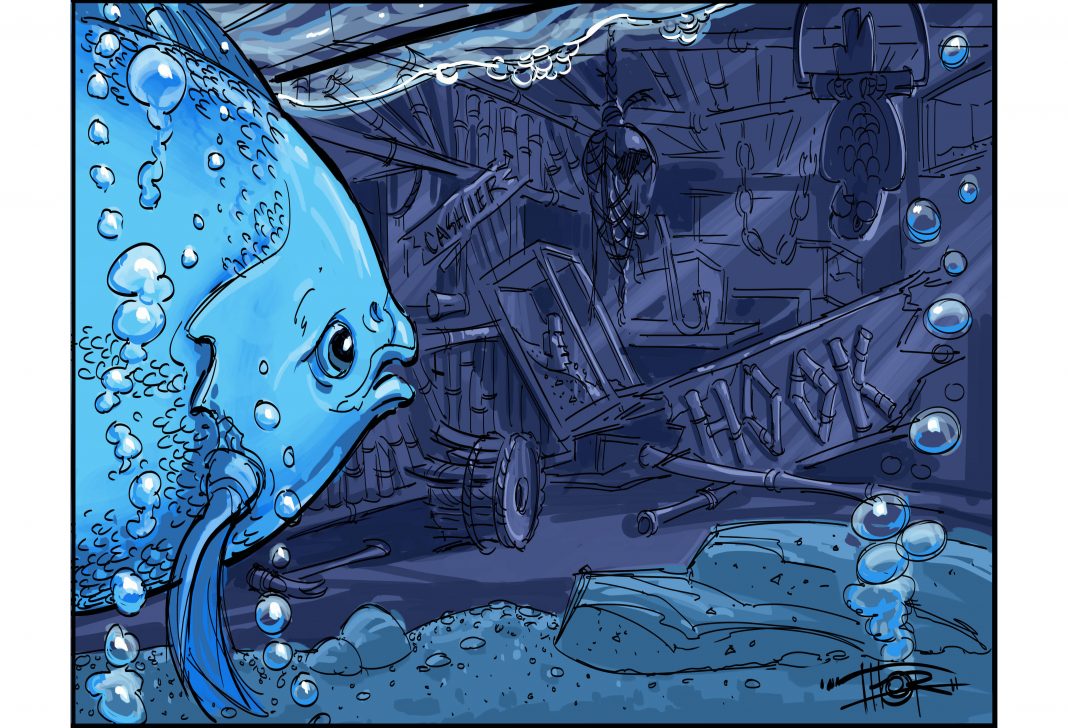 Rufus, the giant fish that welcomed generations of visitors to the Bahooka restaurant in Rosemead, is looking for a new home. The 38-year-old pacu has been munching carrots and floating inside one of the 105 tanks that decorated the shipwreck fantasy restaurant from 1976 until it closed last March. The sea creature emoted behind Johnny Depp in Fear And Loathing In Las Vegas, and became the living symbol of a revived Polynesian pop culture before the restaurant shuttered and he was left in a world without humans, hovering in the dark. Los Angeles magazine writer Ed Leibowitz once described the silent animal as having the “tragic, loving eyes of an aging Marlon Brando.” Jorge Mastache, a former cook at the restaurant, comes by every morning to feed Rufus.

“He’s an icon,” says Book Of Tiki author Sven Kirsten. “And he deserves to be saved.” Supporters have been working with the property owners as they clear out the last layers of lush décor and prepare to open a tiki-free spot serving Chinese food. Andrew Meieran, the owner of downtown’s Clifton’s Cafeteria, purchased most of the artifacts in a sale last year. He plans to use them in a new bar inspired by the Hawaiian-themed Clifton’s Pacific Seas. He is one of several potential stewards for the beloved fish. “I’m very concerned about his health and well being,” says Meieran. “I am definitely looking at all possibilities to provide him a loving new home.”

Some have expressed hesitation at the move, worried that Rufus’s advanced age and special requirements make it impossible. The Shedd Aquarium in Chicago recently celebrated the 80th birthday of their Australian Lungfish, and some aquatic species have been known to live for more than a century. Fans have reached out to the Aquarium Of The Pacific and other specialists in an effort to rescue the monster fish but it might fall on another restaurateur to save him. “He’s the embodiment of the spirit of Bahooka,” says Meieran. “And all that’s amazing about tiki culture!”

Spread the word: Use the hashtag #SaveRufus to help the fish find a place to spend his golden years. Potential new owners for Rufus should contact Esteban Silva at (626) 602-4522.