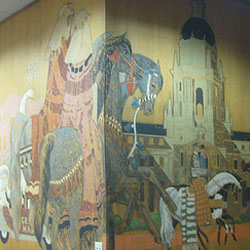 An enormous mural painted on walnut and depicting the Pasadena Rose Parade has found a new home. The 1963 work, by master artist Millard Sheets, was originally installed in a Home Savings of America Branch at Lake and Colorado. When that branch was demolished in the late 1980s, the artist’s son Tony Sheets removed and relocated the mural in a new Home Savings on the site. The piece survived a takeover by Washington Mutual, but current owner Chase Bank had other plans. The piece was removed by the younger Sheets and stored on the Los Angeles County Fairgrounds in Pomona. The family of the artist has spent two years searching for a new spot for this piece and working with Chase and preservationists on retaining or relocating other sculptures and mosaics created by the Sheets studio for bank founder Howard Ahmanson. The Pasadena Star-News reports that the family has made an arrangement to install the piece in a new gymnasium under construction at Pasadena City College. We’re glad to see such a homecoming, and hope it is its new home before the January 1st parade. This new spot is right along the parade route.