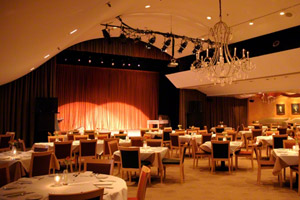 Reports came in this morning that a demolition fence has gone up around the legendary Friars Club building on Santa Monica Boulevard in Beverly Hills. A dance studio was proposed for the site, but the club is coming down and no plans for a new building have been submitted.

The Friars’ opening in 1961 was presided over by (another) Governor Brown. The private club was soon hosting roasts and testimonials for their members including Frank Sinatra, Sammy Davis, Bob Hope and Ronald Reagan. I should have known something was amiss when I spotted those gorgeous Nicholas Volpe portraits of Sinatra el al up for sale last month through Julien’s Auctions. They once hung in the padded white leather bar of the sumptuous and organic modern masterpiece designed by architect Sidney Eisenshtat. Milton Berle was one of the founders of the club modeled on the New York original. By 2005, the relationship had ended and the club was forced to stop using the name. The newly christened Club 9900 lingered on for a while and is now heading for that big rat pack reunion in the sky.