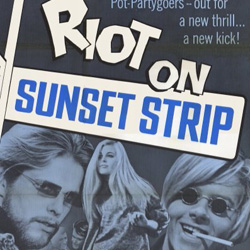 The Echo Park Film Center rolls their filmmobile down Sunset Boulevard tonight for a free outdoor screening of the 1967 teensploitation flick Riot On Sunset Strip at 8pm. The guerilla show will be on the very site that the county sheriff’s clashed with longhaired music lovers on November 12, 1966. The odd-shaped island at Sunset and Crescent Heights was once home to Pandora’s Box, a wildly popular beatnik coffeehouse and music club that marked the Eastern entrance to the strip. West Hollywood neighbors, angry with the young rock fans for… well, for being young rock fans, convinced the cops to enforce loitering and curfew laws and shut down the clubs (like Pandora’s) that drew these big crowds. The movie dramatizes the results. Author, producer and Strip expert Domenic Priore will set the stage by reconstructing the neighborhood of the ‘60s with a slideshow. Then rock out with The Standells, The Chocolate Watchband and The Enemies rock out, just don’t dance into traffic.