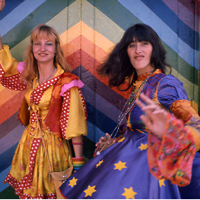 Last month in my “Ask Chris” column I answered a reader question about the lost plaques at the Earl Carroll Theater in Hollywood, that streamline edifice that currently houses Nickelodeon on Sunset. I wrote about how the 1930s celebrity autographs were taken down in 1968 for the production of the musical Hair in that space. The Dutch art collective The Fool was called in to create an enormous psychedelic mural over the entire building. This was the group that would go on to travel the world, record their own album, create costumes for the Hollies and Procol Harum, paint cars for rock stars and create a giant mural for the Beatles in London. I recently contacted original member Marijke Koger-Dunham and she sent along some amazing and delightful photographs from the creation of the L.A. piece back in 1968. Is that Mama Cass frolicking with The Fool? Is that (Hair co-producer) Tommy Smothers’s face in the Aquarius figure? Far out! Enjoy!