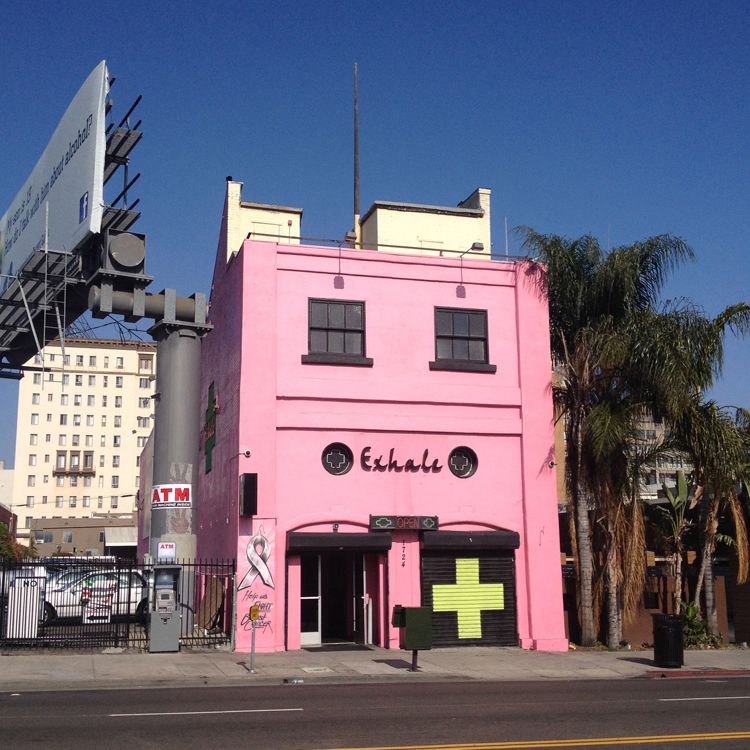 A graphic artist, urban archeologist and executive editor for Taschen publishing, Jim Heimann has been exploring the rhythm and funk of L.A. boulevards for decades. He has created books on roadside giants, classic restaurants and all manner of highway architecture meant to be read from your vehicle at 35 mph. Photographer Ryan Mungia has been documenting L.A.’s ever-evolving collection of marijuana dispensaries from behind the wheel of his car and the two have collaborated on a new publication, Pot Shots, a slim volume on a huge phenomenon. Mungia’s documentary photographs capture some of the hundreds of storefront dealers Heimann says are “hiding in plain sight” all over the city, ranging from blank walls with simple green crosses to elaborate street art confections to a repurposed art deco tower on Magnolia Boulevard. “The questionable looking shops of a few years ago.” Heimann writes “Have been replaced by businesses what could house an upscale sushi restaurant.” Mungia’s new Tumblr includes even more pot shops, like the converted KFC in Culver City and the shop in Echo Park that claims to be “Your ‘Official’ Dodgers Dispensary.” A new city ordinance might spell the end for many of these shops, so take a look before the smoke clears.