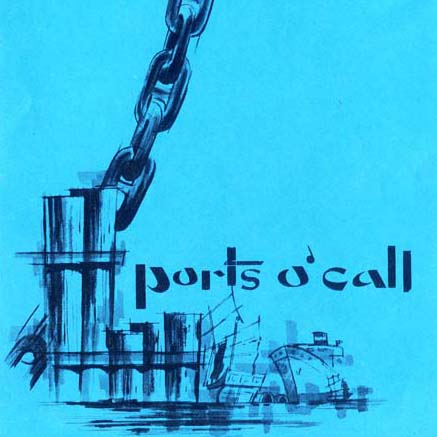 Councilman Joe Buscaino and the Port of Los Angeles have announced plans to redevelop Ports O’ Call Village in San Pedro. For almost 50 years the land has been home to a collection of eclectic shops and restaurants perched on the water. The elaborately themed seaside entertainment venue was conceived by David Tallichet, a WWII pilot-turned restaurateur who also built the Castaway and 94th Aero Squadron.

Tallichet’s vision was an eclectic mix of international destinations knitted together with cobblestone pathways, strolling musicians and global cuisine. Set amidst the Hong Kong Village, “Old California,” Polynesian pop and New England architecture were roving entertainers, 42 international gift shops and two floating restaurants aboard paddle-wheel steamships. By the mid-1960s plans included a miniature railroad,  puppet shows, square dances and helicopter rides. The Village was a huge success through the 1980s when shipping at the harbor grew to the gargantuan scale it is today and theme restaurants fell out of style. The buildings began aging before they were even completed. “Nothing is being spared to recapture the authentic old world atmosphere.” Designer Vernon Leckman told the Los Angeles Times in 1963. “Finishes are designed to weather quickly so as to enhance the weather-beaten appearance. Even the nails are ungalvanized iron to encourage rusting.”

Despite the harsh conditions, current owner Jayme Wilson reinvented the spot as a waterfront wedding destination. He operates a popular harbor cruise and elaborate seafood market and restaurants with mariachi bands and live music that continue to draw massive crowds of working class families on weekend afternoons and flocks of seagulls the rest of the time.

The port has been pouring money into the neighborhoods and waterfront of San Pedro for years, creating a giant new marina, a Las Vegas-style fountain and restoring a historic Red Car trolley. Future plans include the continued removal of industrial-era infrastructure and the transformation of warehouses, tank farms and historic remnants from the commercial fishing industry into bike paths and open space. All this deaccessioning, all this land reverting back to a natural state feels almost sci-fi. With mass automation and those intimidating Transformers-scale cranes, the ships appear to empty themselves. Where are the people? The parks and paths the port is creating are little used outside of special events.

I love the Warner Grand and the Maritime Museum. Crafted is going to get better and better and I look forward to touring the U.S. S. Iowa. There are all sorts of fun things to do in San Pedro and I applaud any effort to make this place better but these empty parks are way creepier than the empty warehouses were. Where did everybody go? Are the stevedores and longshoremen chillin’ at Cake Bar? Vast acreage of native plants and unused benches are not equal to the feeling of community that exists at a place like Ports O’ Call.

While the current version of Ports O’ Call Village is not living up to its potential, it is alive and popular. Restoring the original concept of an international marketplace in a highly stylized theatrical setting could turn it into some magical Disneyland by the sea. Wouldn’t that be better than another empty concrete plaza or soulless big box wasteland? Here’s hoping that there’s another Tallichet out there. Here’s hoping that someone with vision and heart throws their hat into the ring and brings back this amazingly weird and wonderful corner of L.A.