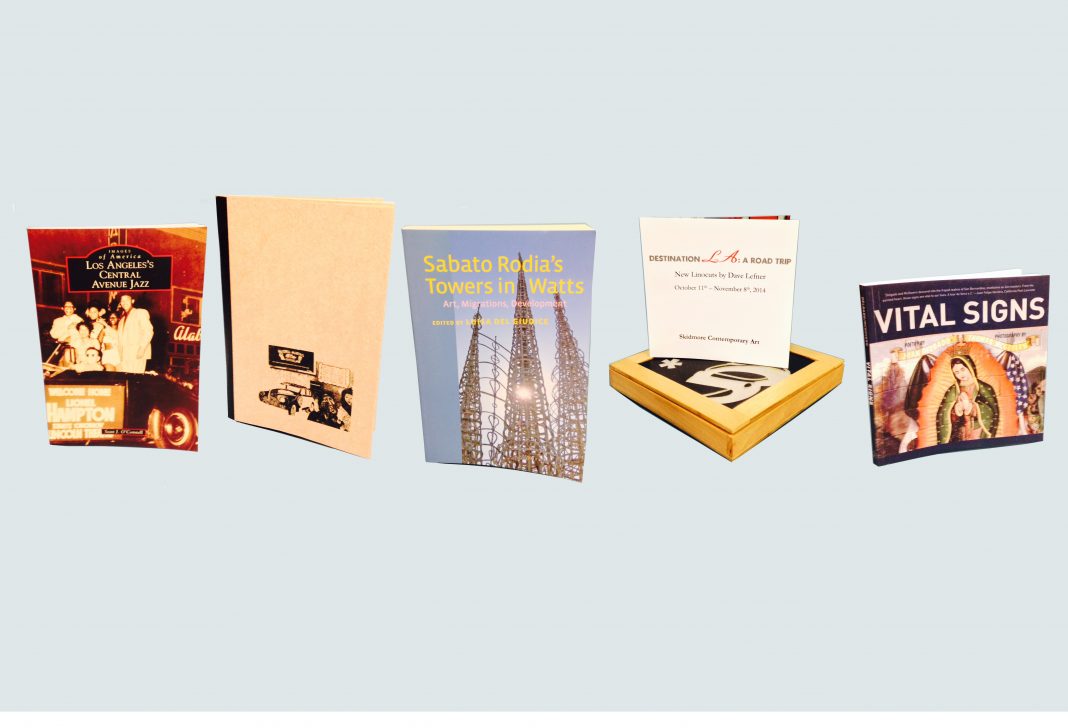 Today is the 79th anniversary of modern paperback books. Ariel was published by Penguin on July 30th, so let’s celebrate with the latest paperbacks about our favorite place. These new books are like an armchair adventure through the big city. Stuff one in your pocket and let’s go exploring.

All Night Menu: Volume One
Sam Sweet
This special little delicate tome is all of 64 pages but feels like a scavenger hunt into eight little-known Los Angeles addresses. The route takes us from Venice to the Eastside looking for hidden histories of long-lost residents. A female bullfighter, boxer George “Scrap Iron” Johnson, and a couple of Valley teenagers caught in Griffith Park half a century ago come to life in these tiny stories, so artfully presented, that shine a light on the elaborate backstories of our far-flung neighborhoods.

Los Angeles’s Central Avenue Jazz
Sean J. O’Connell
I used to balk at the lo-res, random nature of the “Images Of America” series, but I’ve come to see them as a great index to new neighborhoods. They are a great first glance at a place you know nothing about. American youth soccer was born in Torrance? Who knew? The Central Avenue edition covers a tiny neighborhood, greatly changed, whose glory years are far behind it. As a collector, I know how impossible it is to find the photos, postcards, matchbooks, and menus inside. If they inspire you to visit the Dunbar Hotel or attend the Central Avenue Jazz Festival, they have done their job.

Vital Signs
Juan Delgado and Thomas McGovern
A poet and a photographer head out to San Bernardino in search of the folk art that attempts to liven up dying strip malls. A cast of cowboys, roosters, and the Virgin Mary mark a new generation’s recycling of the cast-off hamburger stands and industrial infrastructure of the 20th century.

Sabato Rodia’s Towers In Watts
Luisa Del Giudice
This hefty (nearly 500-page) look at the little-known artist behind one of the most famous sculptures in America examines his Italian identity, the growth of Watts, and similar folk art creations around the world. Essays from more than a dozen academics and the transcript of a little-known interview with Rodia himself provide an intensely serious look at a fanciful creation.

Destination L.A: A Road Trip
Dave Lefner
I received the booklet that accompanies Dave Lefner’s linocut show at Skidmore Contemporary Art in a magnificent wooden box with a carved linoleum cover and a custom print inside, so I was instantly won over. They even threw in a USB on a vintage motel keychain for good luck. Lefner’s love affair with the fonts of Los Angeles is addicting. He separates the glorious letterforms from the Sahara Motel or the Frolic Room from their distracting and dirty urban environment and celebrates them as fine art. His highly detailed rendering of neon tubes makes you appreciate the hours that glass blowers put in creating them in the first place.