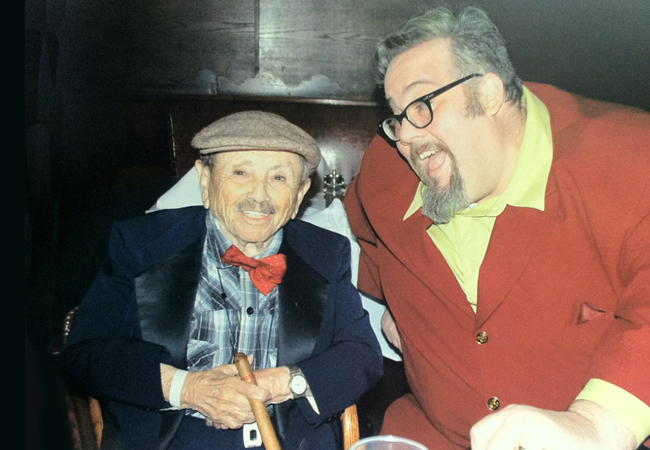 Let’s get one thing out up front. Original 1939 Wizard Of Oz munchkin Jerry Maren (above with cigar) does not appear in Oz The Great And Powerful opening today, but no less than four members of the director Sam Raimi’s family are cast in the film. I visited the last living member of the Lollipop Guild at Musso and Frank Grill as he celebrated his 93rd birthday recently with a veal chop and a line about how crazy anybody would be to leave Los Angeles once they found this magical place. He arrived in 1939 and has no plans to leave. This new film has plenty of sex and violence (James Franco seems to make out with everybody) but lacks everything Jerry has in spades, chiefly warmth, humor and sincerity. At the screening I attended, little children were literally sobbing in the audience. The digital rotoscoping and electronic rendering were top notch, what with all the full-frame digital monkeys screaming and screaming in Dolby® Atmos™ sound, but the simple pleasures and humanity of the 1939 film were sorely missing. You don’t care if this Oz finds his way, flies in a balloon or goes out for a smoke. There is no home to get back to, and his friends don’t cry at the end, they fly off or get carried away by screaming screaming monkeys.