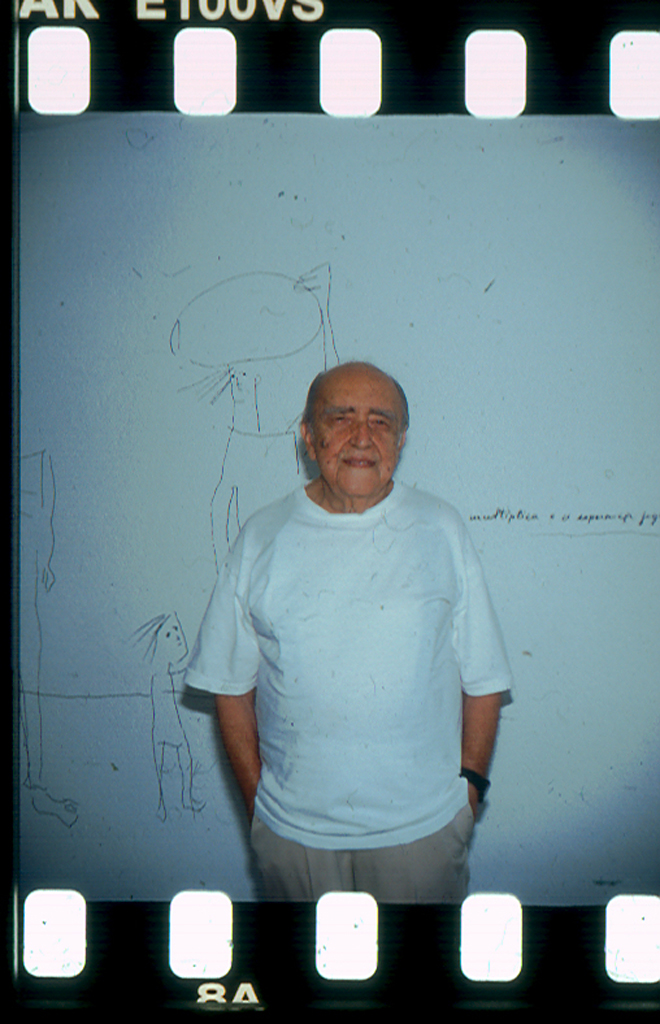 Pritzker Prize winner Oscar Niemeyer, an international icon of world architecture, died yesterday in Rio de Janeiro. The 104-year-old modern master was known for his creation of Brasilia, a new capital for Brazil carved out of the jungle in the 1950s. He continued working on flowing organic buildings in his South American studio until his death. Silver Lake historian Peter Moruzzi visited the designer in 2000 and took this snapshot. He notes “Niemeyer’s sketch of the mother and child behind him are examples of the drawings that covered the white walls of his studio.“

Niemeyer’s two creations in the United States are the United Nations building in New York (With Le Corbusier) and a home in Santa Monica designed for film director Joseph Strick and his wife Anne in 1964. Mrs. Strick lived in the house until 2002 when it was purchased by songwriters, deisgners and furniture collectors Michael and Gabrielle Boyd, who saved the house from demolition and spent two and a half years restoring it. Niemeyer’s other L.A. legacy is the work of his onetime draftsman W.A. Sarmiento. Los Angeles magazine profiled Sarmiento in 2001. Sarmiento called himself a “peon” in Niemeyer’s office, but the Peruvian modernist was inspired and created swoopy, soaring and elegant bank buildings from Panorama City to Newport Beach. Sarmiento lives in Santa Monica, not far from the Strick house. Here’s a self-guided tour of some of the best of Sarmiento’s Southern California buildings.