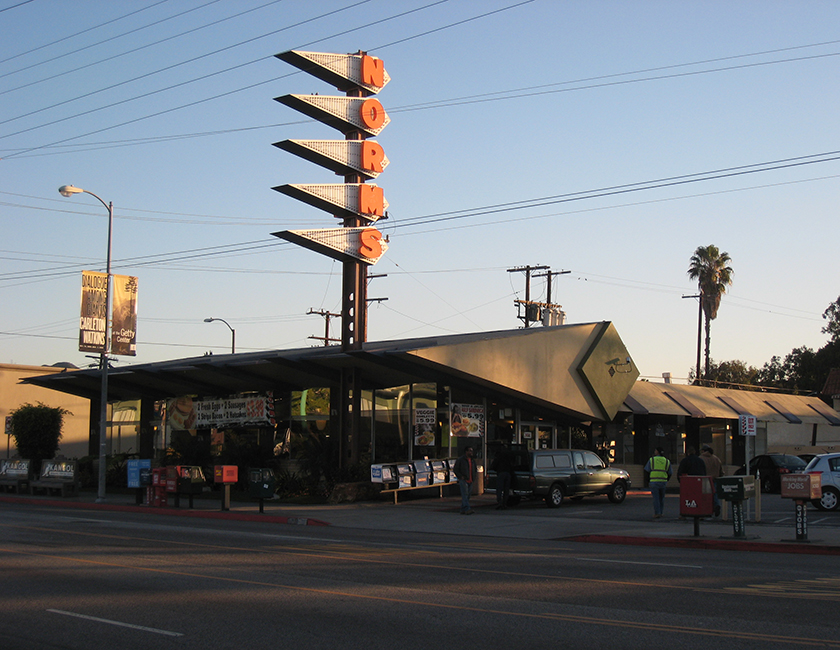 After more than 65 years of family ownership, Southern California’s iconic Norms restaurant chain has been sold. The flashing neon and 24-hour sizzling grills have been a Los Angeles institution since Norman Roybark opened his first location near the bustling music scene at Sunset and Vine in 1949 and will continue on under new owner Jim Balis.

The Idaho native, who is in the process of relocating to Los Angeles, has a long history in the hospitality industry, with stints improving the bottom line at Dunkin’ Donuts and the regional chains Fatz and Sticky Fingers Smokehouse. “Historically, turnaround is what I’ve done,” says the new CEO. “This is clearly not a turnaround situation, this is much more of a growth situation.”

Three generations of the Roybark family oversaw 18 coffee shops from their office in Bellflower until just before Christmas, when Balis and new president Mike Colonna took over. Colonna also has a long restaurant background that includes Chili’s, Boston Market, and Victoria Station. Why did the Roybarks sell? “You’d have to check with the family,” Balis says. “For whatever reason it was up for sale and we responded.”

Norms, Bob’s Big Boy, and Denny’s all grew from the same fertile soil of Post WWII Los Angeles. Each began with similar menus and service and all three even hired the same architects, Santa Monica-based Armet Davis Newlove, to design their flashy googie buildings. While the others cut corners to expand nationally, Norms stayed small and local. Their kitchen operates today much like it did in the 1940s. “Our butcher has saws in the kitchen so all the steaks are cut in the restaurant.” Vice President Jerry O’Connell explained. “We grind our own hamburger multiple times throughout the week, we make our own soups from scratch, we cook turkey and roast beef fresh throughout the week.” O’Connell’s 35-year career is not unusual in a company where even late-night waitresses have been working the counter for decades.

“We have decided to sell the company and let others carry on the traditions,” reads a statement from the Roybark family. “The new owners were carefully selected to protect the legacy of Norms.” Norman Roybark operated a used car dealership on South Figueroa and a Nash dealer on Crenshaw before opening his first coffee shop on Sunset, across from what is today the ArcLight Cinemas. The architects at Armet Davis Newlove, who have been designing restaurants since 1947, have said that the animated neon pennants on the Norms signs are reminiscent of the pennants fluttering over used car lots.

The colorful shapes and even more colorful atmosphere of Norms, especially the flagship store on La Cienega, have become stand-ins for the garish glory of midcentury California. That roofline shows up everyplace from LACMA to the Chinese American Museum, and from Ed Ruscha’s pop art masterpiece Norms, La Cienega, on Fire to a thousand dollar birdhouse on etsy.

The electric architecture is stunning, the camaraderie and community is inspiring, and where else can you get soup, salad, and an entrée for under $10?

“We think it’s a great company that has great heritage and is an iconic brand in Southern California,” says Mr. Balis. “We’re very passionate about what it stands for.”

I wish the best for the new team and encourage them to stay the course, and keep the heart and soul of this place beating strong for the next generation.