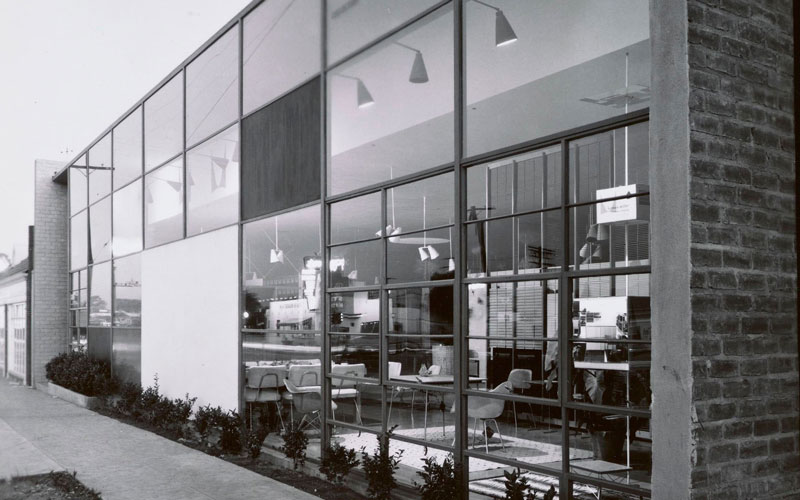 Charles and Ray Eames were two of the most important designers of the 20th century. Their art, furniture, and films are as fresh and vibrant today as they were in the 1940s and ’50s. In 1949 the couple designed their magnificent glass-and-steel home on a bluff in Pacific Palisades and the Herman Miller furniture showroom in West Hollywood.

Developer Jason Illoulian’s Faring Capital (which also owns Norms La Cienega and the Factory nightclub on Robertson) owns the showroom, as well as the adjacent 1931 art deco building (formerly Poliform), former Tommy Hilfiger retail store, and 4-story apartment house. He has plans to use the space to build a mixed-use development. The multi-story project includes a hotel, retail, and approximately 80 residential units, according to West Hollywood associate planner Adrian Gallo. It would only partially preserve the Eames showroom.

“They’re keeping the first half of it intact,” Gallo said of the showroom. “And the back half of it would be the new building.” Adrian Scott Fine, preservation director of the Los Angeles Conservancy, wants to see a more sensitive approach. “I understand that the intent is to preserve the front of the building,” he says. “It’s more than a facadectomy.”

The original showroom interior was modular and designed to show off furniture the way it might look in a home. Charles and Ray Eames designed covers for Arts & Architecture magazine, and their pieces were ubiquitous in the magazine’s Case Study House program.

Representatives for the developer will be sharing more plans tonight at a community meeting for neighbors to learn how the project will affect them. Roy Rogers Oldenkamp, president of the West Hollywood Preservation Alliance, is confident the new project will save much of the original building. Oldenkamp relayed a Faring spokesman’s message that the project will “peel back the layers of time to bring the Eames masterwork as close to the original as possible.”

It’s one thing to update the interiors of a neoclassical building when stone and stucco hide everything. Saving a glass façade requires a real master. I wish that Charles and Ray were still around to take the job.