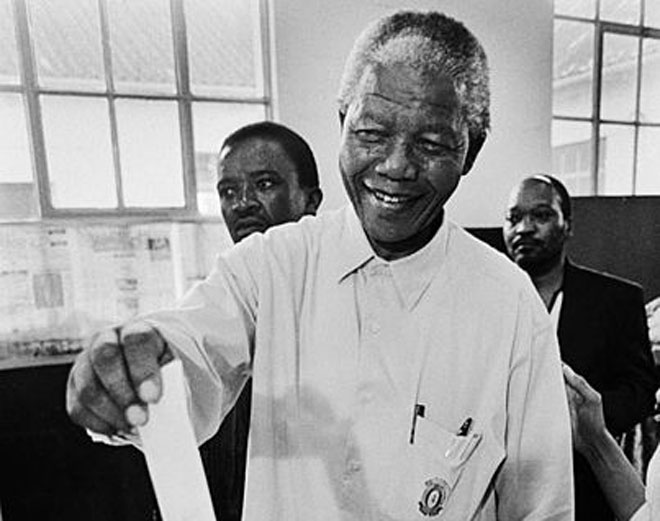 Mandela casting his vote in the 1994 elections. Photograph by Paul Weinberg, courtesy Wikipedia.org

Anti-apartheid revolutionary Nelson Mandela is being feted today as he celebrates his 95th birthday while recovering from illness in Pretoria, South Africa.

Mandela is famous for becoming the president of South Africa after spending 27 years in prison for trying to overthrow the South African government and for his dedication to improving racial relations in the country. Less well known is Mandela’s connection to Los Angeles. He visited the city on June 29, 1990. We were the 8th stop on a 12-day visit to the United States. ”For us in our youth, Hollywood was the stuff of dreams,” said the then 71-year-old leader. “In a sense, our youthful dreams are to some extent being realized.” Celebrities, politicians, and thousands of Angelenos welcomed the man who helped end apartheid. In honor of his birthday, we have re-created the itinerary for that historic trip.

1. The leader arrived at LAX onboard the Trump Shuttle, Donald Trump’s short-lived luxury airline. The wood-paneled, gold-fixtured jets stopped running in 1992. Mandela’s motorcade closed the eastbound lanes of the Santa Monica Freeway on its way to downtown Los Angeles.

2. Thousands of supporters showed up at Los Angeles City Hall, and were treated to a performance by a 500-member choir from the First AME Church. The crowd grew impatient during speeches by emcee Gregory Peck, Sidney Poitier, Muhammad Ali, and mayor Tom Bradley, and some began chanting Mandela’s name. When he appeared to the cheering crowds he held up the key to the City of Los Angeles.

3. The Los Angeles Memorial Coliseum hosted 78,000 supporters to see the statesman, and performers including African dance troupes, and rappers Def Jeff and Tone Loc. Proceeds from the sale of $10 tickets helped support the social and political work of Mandela’s African National Congress.

4. More than a million dollars was raised at a gala dinner held in the Exposition Park Armory. President Mandela visited the Museum of Science and Industry (rebuilt as the California Science Center in 1998) earlier in the day.

5. The historic Biltmore Hotel in downtown Los Angeles was home to Mandela during his visit here. The leader was recovering from recent surgery and his colleagues considered canceling the L.A. visit. Mandela met with dignitaries in his hotel room, including former Soviet dissident Natan Sharansky.