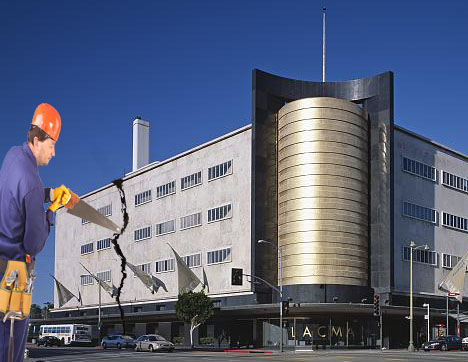 The Academy of Motion Picture Arts and Sciences recently released the Environmental Impact Report for their proposed Museum of Motion Pictures at the old May Co. building at Wilshire and Fairfax. The massive nine-volume study outlines the effects on everything from traffic to greenhouse gases, along with some exceptionally artful fluorescent pop art imagery explaining the luminescence of Renzo Piano’s bubble in the back. Let me just say that I dig the bubble, the sphere, the eye -whatever folks are nicknaming it – and I’m a big fan of the Academy. Having said all that, I’m not digging the massive demolition planned for the old department store. About 80,000 square feet of the limestone landmark will be ground into rubble for this project, including the entire north façade, as well as 1/3 of the Fairfax frontage. The bubble needs room to breathe, so the architects propose returning the building to its 1939 size, removing an addition built 7 years later. Now, unless you are an octogenarian shopper who remembers the brief period before the store was expanded you probably have no idea where the FDR-era limestone ends and the Truman-era limestone begins. The expansion was designed at the same time as the original store, by the same architects, and used the exact same materials. I think most folks agree that the A.C. Martin and Samuel Marx-designed store is pretty magnificent, and not just the section along Wilshire Boulevard.

Historic preservation advocates call the area where new construction meets old a “hyphen” and feel that this project has a pretty good one. The original landmark designation was written so narrowly (previous owners planned to tear most of it down for a mall in the early 90s) that the Office of Historic Resources is unable to object to the plan, and finally the Environmental Impact Report claims that no historic resources will be harmed in the making of this motion picture museum.

Having said all that, I know that when those stone panels start falling, I’ll start getting calls and hearing complaints ranting about the loss of historic buildings in this city. I’ll hear about how there’s “nothing left” of the old building, and what a failure this is for preservation. Take a look at the report, if you feel like commenting, do it before October 14th. Speak now or forever hold your peace.