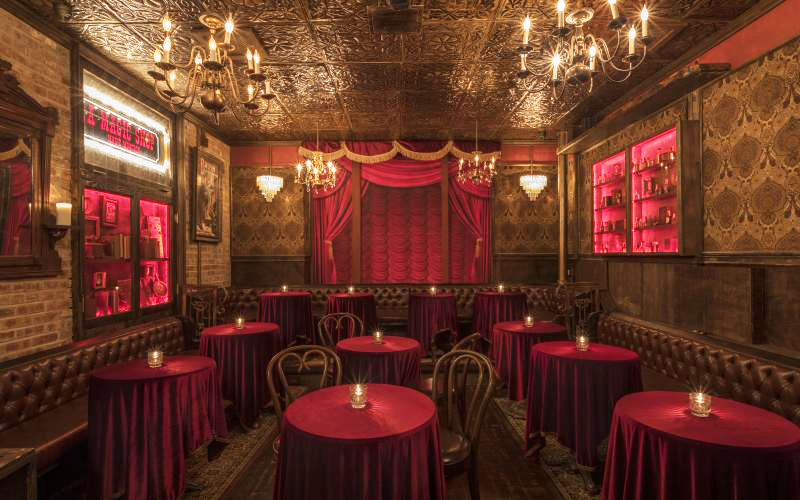 An extraordinary new magic-themed nightclub called Black Rabbit Rose is officially opening next Tuesday on Hollywood Boulevard, and it looks spectacular. The latest enterprise by the Houston Brothers (the twins behind La Descarga and numerous other theme bars) includes a 40-seat theater, a Thai-Chinese dinner menu, and a cocktail lounge featuring roaming magicians, exotic variety acts (think sword swallowing), and burlesque dancers. The club was custom built with rooms that might suddenly come to life during performances.

The rooms are filled with tributes to 19th century magicians and tucked into a century-old apartment house. The flamboyantly ornate interior, dripping with gilt and velvet, may even remind you of the Magic Castle, less than a mile away. In a genius move, the club secured the services of longtime Castle favorite Rob Zabrecky as entertainment director and occasional performer. Charles Addams could not have cast the role better. Zabrecky’s cadaverous pallor and aura of foreboding create the gravitas that his spellbinding performance deserves. If you see his name on the bill, hotfoot it over to the Boulevard immediately.

Black Rabbit Rose will be open Tuesday through Saturday with ticketed shows ($25-$40) on Thursday, Friday, and Saturday nights.

A Long-Dead L.A. Magician Is Bringing Angelenos Together to Solve a Puzzle

The Best Magic Show in L.A. That’s Not at Magic Castle