Home Travel A Look Inside Sunnylands, the Magnificent Mid-Century Estate Near Palm Springs 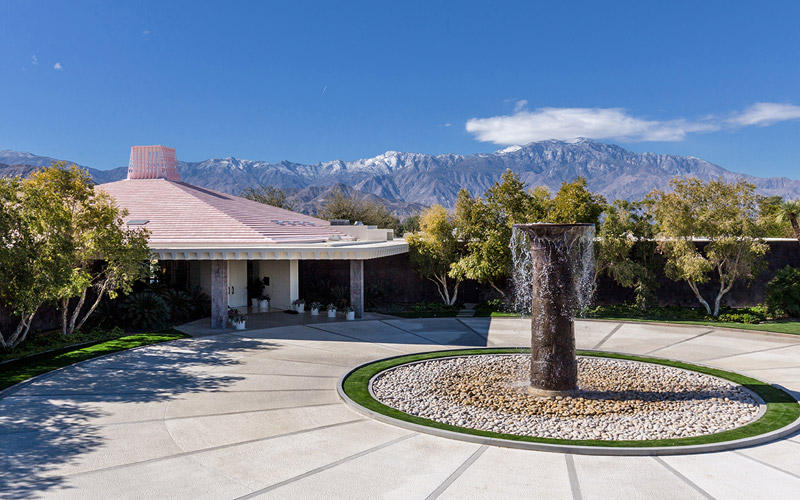 If you have visited the Annenberg Space for Photography or the Annenberg Beach House or the Annenberg Center for the Performing Arts in Beverly Hills, you’ve experienced the legacy of that famous family. In the mid-1960s Walter and Leonore Annenberg were at the top of their game and built Sunnylands, a spectacular private resort compound in Rancho Mirage, just outside of Palm Springs.

Their magnificent modernist home lives on as a public garden and private retreat dubbed “Camp David of the West.” A new book, Sunnylands: America’s Mid-Century Masterpiece, shares the history of the estate, designed by architect A. Quincy Jones, with spectacular photos, original sketches, plans, and even family snapshots by the Annenbergs. The furnishings by designer William “Billy” Haines were restored along with the house in 2012.

Walter Annenberg made his fortune through a vast media empire that included The Philadelphia Inquirer, Dick Clark’s American Bandstand, Seventeen magazine, and TV Guide. He donated much of it to philanthropic causes, including a billion dollar art collection including works by Van Gogh, Monet, and Renoir, which is now at the Metropolitan Museum of Art in New York.

The most famous golfers in the world played the private course at Sunnylands, including every president from Eisenhower to Obama. Dozens of vintage customized balls from folks like Frank Sinatra and Richard Nixon were discovered during restoration work. Photos of Nancy and Ronald Reagan lounging by the poolside and Leonore Annenberg tooling around in her golf cart make the book feel more like a family album than an architectural monograph, but A. Quincy Jones is definitely given his due. The architect known for glamorous tract homes for Joseph Eichler and the co-op Crestwood Hills development was really able to stretch his wings creating the 32,000 square foot home with open atriums and a pyramidal roof.

“There is no other midcentury modern house on this scale or of this integrity that reflects such a golden moment in California history,” says author Janice Lyle, who is also the director of the site. The house is still golden and you can visit. Tours depart every 15 minutes Thursday through Sunday.