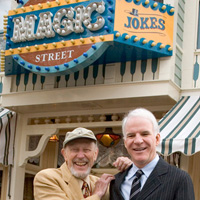 The Guinness Book of World Records notes the Golden Horseshoe Revue at Disneyland as the “World’s longest-running live stage show.” The 19th century style vaudeville show was performed in Frontierland for over thirty years, starting when the park opened in 1955. The comic star (and writer) of the show was Wally Boag, a rubber faced comedian that had performed in nightclubs all over the world and on early TV shows like Ed Sullivan’s Toast of the Town. I had the pleasure of attending a tribute to Boag three years ago and, though hobbled by age, the showman was still funny and captivating and joyful.  Boag died in Santa Monica on Friday at the age of 90. I happened to be at Disneyland and dropped into the theater to pay my respects.

Boag was a huge influence on the young Steve Martin, who took a job at Disneyland at the age of 11 and became a Boag superfan, memorizing his lines and taking cues that would influence his comedy for decades. He recalled Boag in Los Angeles magazine earlier this year and posted a remembrance on the Disney Parks blog that I will excerpt here with permission:

“…Wally had something about him, an infectious happiness, and a mysterious something else I later learned was called comic timing. He was immensely likable and youngsters and oldsters responded with equal hilarity. There was a dose of naughtiness about him too, which worked well in the squeaky-clean Disneyland environment. I became addicted to the show, and its four to five shows-a-day schedule meant that I could drop in practically anytime and watch Wally at work. After a while, I memorized every line and would recite them in my head as Wally spoke them, and I took delight in having the laughs appear, even though I had no role in getting them. I would monitor the rise and fall of the laughter, knowing that this joke would get a smaller response – but wait! – the next one’s a killer! I kept waiting for the day when Wally would have a cold, stub his toe or blow a tire and the stage manager would pull me from the audience and whisper, “Wally can’t make it; can you go on?” “Yes,” I would have said, “Yes, I can go on…”

(For the full tribute from Steve Martin click here)