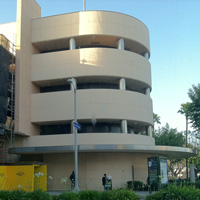 Share
Email
Facebook
Twitter
Pinterest
ReddIt
The Baldwin Hills Crenshaw Plaza was built in 1947 to house a May Company and Broadway Department store along with a Vons market and an arcade of specialty shops. The mall was remade in 1988, but still maintains its two original anchor buildings. The center claims to be “oldest regional shopping center in operation in the United States.” The mall is currently under renovation with Rave Cinemas taking over the former Magic Johnson theaters and major changes coming to the pedestrian bridge over Martin Luther King, Jr. Blvd. That space may house a restaurant, but its the connection to the historic May Co. building and the three story cylindrical tower (a little cousin to the flagship at Wilshire and Fairfax) that has my preservationist friends on alert. We hope the work is sensitive to the old department stores, even if the Broadway is now a Wal-Mart.