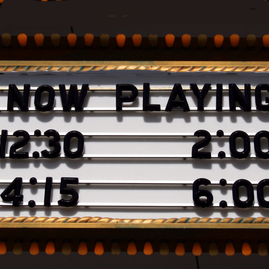 My favorite type of movie experience, a high quality print of some unusual film in a single screen movie palace, is as endangered as some tropical monkey. It’s under attack from all sides and changing by the day. The Laemmle theater chain programs some great movies, but you don’t go to a multiplex for the architecture. However, the venerable exhibitor does operate one grand old movie house, the Royal in West Los Angeles. Film critic Leonard Maltin reports that even this stalwart is getting a facelift. Say goodbye to that vintage analog marquee. it’s not the greatest piece of electric art that ever beckoned us down Route 66, but it was a lot warmer than another ever-changing digital display.