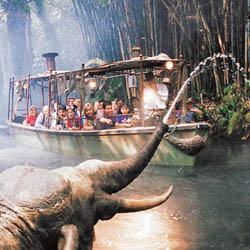 Share
Email
Facebook
Twitter
Pinterest
ReddIt
You probably know that Pixar chief John Lasseter is an Academy Award-wining director and the chief creative officer for the Walt Disney company, but did you that the Whittier native got his start as a skipper onboard Disneyland’s Jungle Cruise? In late 1977 and early 1978 the future animator was juggling classes at Cal Arts with his duties as the captain of the Congo Queen. Now he is looking for photographic proof of his time at the helm, and he’s offering a great prize: A private river excursion through the jungles of Adventureland where he’s sure to show you the “backside of water.” PLUS you can be at his side as he cuts the ribbon on the new Cars Land at Disney’s California Adventure. You might just be the one with the “Disneyland ‘77” album at home, so break out that magnifying glass and get your Mickey ears ready.
Photograph by Paul E. Hiffmeyer