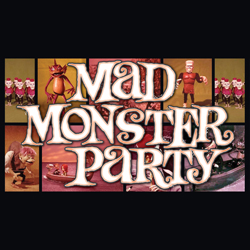 It’s not quite Christmas in July, but the jack-o’-lanterns have already started to appear and the black cats seem to be slinking out earlier this year. Universal Studios and Knott’s Berry Farm open their haunts this Friday and on October 13th, the Van Eaton Animation Galleries are debuting their tribute to the 1967 stop-motion classic Mad Monster Party. More than seventy artistic interpretations of the film will be on display including sculptural, fabric and electronically generated tributes. “We’ll probably have a few precious pieces in a glass case and some larger ones on pedestals.” Curator Phillip Graffham told me. “Someone from Disney Imagineering is doing a five-foot zombie.” Creative crackpots Gris Grimly, Patrick Owsley and the Chiodo Brothers are my favorite artists in the show and sure to cook up something deviant. Original filmmakers Arthur Rankin and Jules Bass had great success with Santa Claus and Rudolph before veering off into monster territory. Graffham says we love the movie because of its perfect storm of vampires, zombies, bug-eyed hot rod culture and pop surrealism. I mean, the movie stars Phyllis Diller as the bride of Frankenstein! The daughter of Frankenstein, Sara Karloff, will be in attendance along with a generation of kids reared on tiny puppets dancing to skeleton rock. “It’s such a strange, offbeat, cheesy movie” said Graffham “That’s just… awesome.”