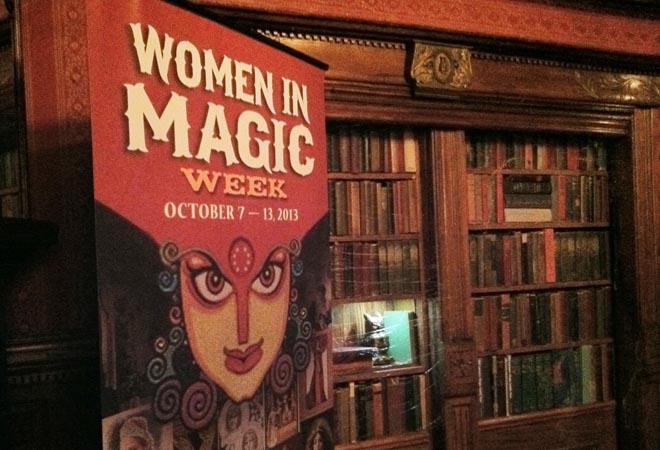 Geri Larsen was the “mother” of the Magic Castle. She introduced her sons Bill and Milt to the art, edited Genii magazine, and performed in nightclubs and on television in the 1940’s and 50s. Her sons opened the club in 1963 and mom Larsen was a big part of it. The club paid tribute to the late performer last year with a “women in magic” show that has now become an annual event. This year’s week of feminine mystique is presided over by Geri’s great-granddaughter Liberty Larsen. The 26-year-old is bold and funny and beautiful and her poetic mind-reading act could be a show on its own. The acts running through the weekend are the best from around the world and include another multi-generational act, Luna Shimada plays with fire and seems to invoke spirits from the four corners. Juliana Chen, visiting from China, made it rain playing cards – so many that, I kid you now, I found one in my wallet after I left! Farrah Siegel is good old fashioned vaudevillian showbiz, performing three or four acts at the same time with a Colgate grin. Beware of Sisuepahn from Laos, she gets a little blue. Well, black-and-white era Playboy After Dark blue. The whole club feels like an episode of Playboy After Dark. You never know who is going to drop by and fill your hands with lipstick and little foam balls.  Do whatever you need to sneak your way into the private club this weekend, ask advice from the Magic Castle Hotel, flag down club president Neil Patrick Harris… it’s a terrific show.