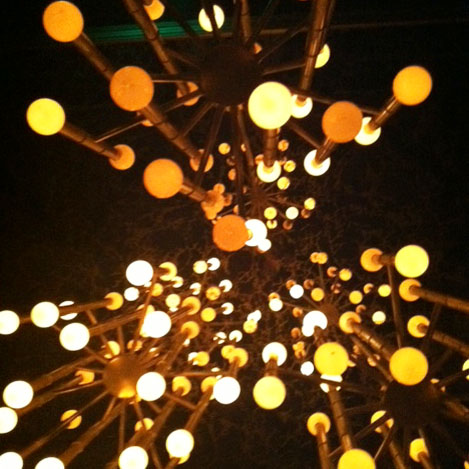 David Arquette opened his new club Bootsy Bellows in West Hollywood last night and I dropped by to check it out. Typically, my common sense keeps me away from the Sunset Strip, and incidents like this one in the parking garage, but the joint sounded too good to be true: A dinner theater inspired by Sammy Davis, Jr. with a puppet show?! I had to be there. The space is divided into two rooms; a larger club with a DJ, pulsing lights and a large dance floor and a smaller VIP lounge in the rear featuring gold banquettes, mid-century fixtures and a slowly spinning disco ball. You can imagine where I camped out. Cocktail waitresses in skimpy leather kitty cat costumes straight out of the Playboy Club-era serve in the lounge, while customers in the front seem to get skinny-tied new wave dudes. Arquette dubbed them the electronica room and the vinyl room. There’s an extensive bottle service menu with a magnum of champagne priced higher than a bachelor pad in 1959.

Arquette (who co-owns the club with John Terzian, Darren Dzienciol, Brian Toll and Deborah Maguire) is a longtime collector and provided much of the vintage décor in the club. The actor arrived dressed in a velvet tuxedo, operated some antique marionettes and promises more. I’ll be watching for their further exploits in the puppetry arts. There’s a coin-operated puppet orchestra, a shadow box theater and an alcove of ‘50s fetish and cheesecake photography featuring Arquette’s late mother, a one-time burlesque performer who went by the stage name Bootsy Bellows. “I found these pictures when I was a kid” Arquette told me, pointing to a Bettie Page-era print of the elder Arquette wrapped up in leather straps and bound with with ropes and a ball gag. “She said, ’Don’t worry, we’re not really fighting.’”