Home Uncategorized Huntington Library Is On A Mission 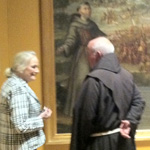 In the new exhibition Junípero Serra and the Legacies of the California Missions, the Huntington Library examines the life of the Spanish monk who paved the path for the California we know today. Serra’s chain of churches and forts forever changed this place and we’re still feeling the impact.  The mammoth exhibit has more than 250 artifacts and is the first major show on Serra in 50 years. Touring the opening with co-curator Catherine Gudis, I was shocked to see a centuries-old robe floating in a case. It was if one of the Franciscan fathers had arrived to accompany us through the show. Peering deeper into the dimness I could see how threadbare the garment had become. “He would have worn the robe,” says Gudis. “Until it fell off his body.”  She then explained how the loaning institution had trimmed the ragged sleeves to pretty it for display. Yikes! Gudis and her team scoured the globe for objects to help explain the era of “New Spain,” when Serra and his colleagues conquered what is now California and Mexico in the name of the Spanish crown and the Catholic church. The show also pays special attention to the indigenous people they encountered and converted by the thousands. “That scrap of fabric,” I overheard a visitor marvel while examining a piece of native grass cloth. “Is older than the pyramids!” One display features the names of 81,000 natives baptized at the mission. Seeing the everyday objects of mission life (a bench, a violin, the original front door of Mission San Gabriel) is a thrilling time machine. It gets a little macabre when you realize the silk scarf (or “prayer stole”) on the wall was buried with Serra and removed during one of his three exhumations. Double yikes! The show is divided into three sections, Serra’s life in Spain, the founding of the missions, and their influence over the centuries. From fourth Grade history projects, and the Mission Inn, Mission Playhouse, Ramona Festival, and every bit of stucco and clay tile architecture ever built here – it all owes its existence to Serra and his vision. Charles Phoenix’s slides of midcentury mission vacations helped lighten the mood, and I’d gladly plunk down for a crate of oranges if they came in packages as beautiful as the ones on display.