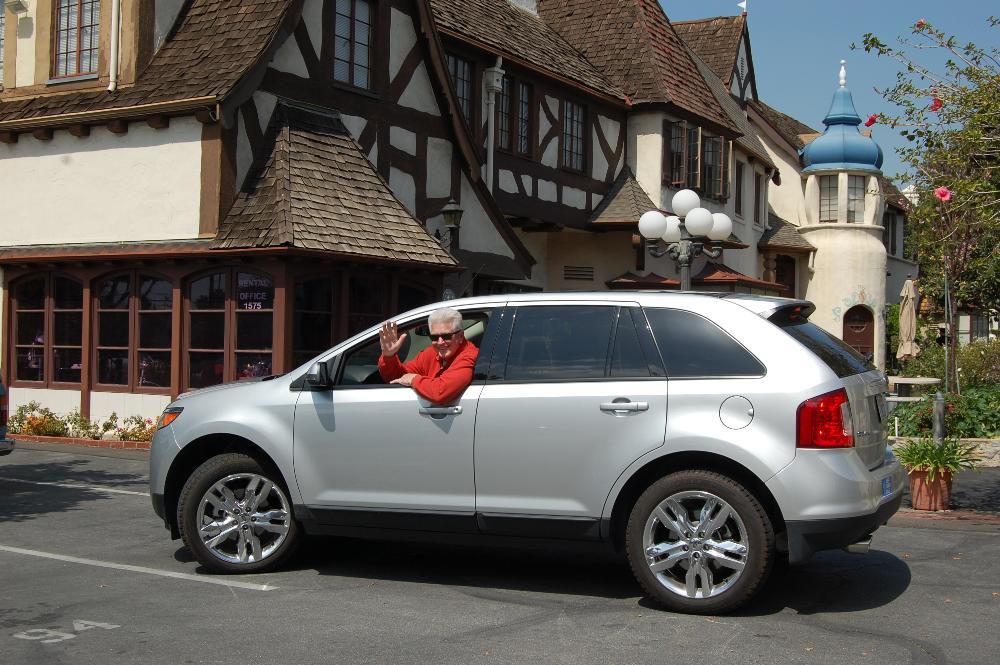 This is a funny town. Sometimes you’re sure the person sitting next to you is a friend’s dad when you suddenly remember he’s just some goofy guy from an Adam Sandler movie. Sometimes we see familiar faces or hear familiar voices in the strangest places. I stopped in at a 7-11 in Koreatown to buy a bottle of juice and heard the booming voice of Huell Howser coming out of the ceiling. He was raving about a new car and was way too excited for that early in the morning. I wanted to hear about his new career as a radio pitchman so I gave him a call. “Boy, you’re really scraping the bottom of the barrel” Huell said when I asked about the commercials. “It must be a slow news day.” I love Huell, but this from the guy who dedicated a whole show to weeds… anyway, Huell says he was sitting at home watching TV and saw an ad for the Ford Edge. “I said ‘That’s an interesting car’ and walked in to Galpin Ford.” Owner Bert Boeckmann spotted the very spottable TV host and came down to meet him. “I told him I was looking for a new agency to underwrite California’s Gold and he helped do that.”

The brother of Super Dave Osborne and comedian Albert Brooks, Cliff Einstein has been running West Hollywood ad firm Dailey and Associates for more than 40 years and Ford is a longtime customer. The automaker sponsored Howser’s show, but Einstein says “You can’t run commercials on public broadcasting so we made an opening and closing about the betterment of America and so forth.” The ad men had been working on a series of testimonial commercials from regular folks and contacted Howser. “We called him and he said ‘I love my car! I’ll do it!’ and we just paid him the SAG/AFTRA minimum.” “He’s a great symbol.” Says Einstein. “He’s the core of America, a small town guy who’s interested in everything. He’s the only celebrity in this whole campaign.”

The spot is currently in heavy rotation and features the most recognizable voice in local TV telling us about the “gangbusters” SUV he and his cameraman drive all over the state. Howser says more people have come up to him about this one-minute radio ad than any of his dozen shows. “It’s a little disconcerting! I have maybe ten people a day saying ‘I heard your ad on the radio’, but it makes sense because my accent is so recognizable and how much I drive around California. I went into it not knowing too much in advance. It’s like the show, if I knew all the answers in advance I wouldn’t be here.” Photo: Huell Howser in his new car outside his new offices at Crossroads of the World in Hollywood. Courtesy Huell Howser Productions.