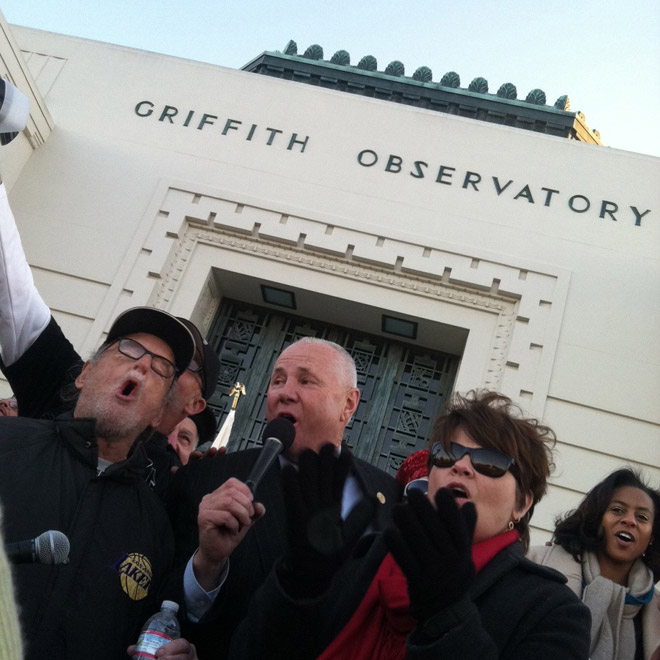 I thought leaving an hour early for the Huell Howser memorial would give me plenty of time to mingle in the crowd before councilman Tom LaBonge’s impromptu salute to everybody’s favorite local TV star yesterday at dusk. By the time I encountered the first roadblock in Griffith Park, the Observatory lot was full, the streets were closed and even the overflow parking at the Greek Theatre was packed! I managed to squeeze into a quasi-legal spot and join the line waiting for a shuttle bus. “Dood,” the kids behind me shouted out. “This is sick!” The bus rumbled past barricades and a wall of news trucks before arriving at the lawn that was as packed as Disneyland. “You mean owl these pie-pool took off work…” fans drawled behind me. Impersonations of that Tennessee twang coated the hillside until LaBonge and his lineup of friends and fans drowned them out with Huell himself crooning California Here I Come. Los Angeles Conservancy director Linda Dishman joked that Huell was the original social network and that OMG stands for “Oh my gosh!” Histotainer Charles Phoenix did his own version of “Amazing!” and praised Huell (and his Marine physique). KCET president Al Jerome mentioned that Huell sent a notarized letter to the station asking not to be memorialized (too late), and the tributes keep pouring in. A giant greeting card went around, flowers abounded, and one group from Orange County even printed up T-shirts proclaiming “Official member of the Unofficial Huell Howser Fan Club” and observatory director Dr. Edwin Krupp pointed out a bright green flash the moment the sun set behind the Hollywood hills. Last year Howser donated his archive to Chapman University and on February 8th the school will host a free open house with screenings of California’s Gold and an exhibit of artifacts from Huell’s travels.  > Chapman University, Memorial Hall, One University Drive, Orange, chapman.edu