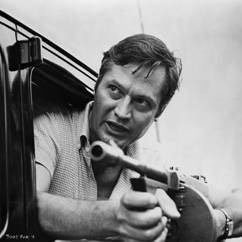 Director and producer Roger Corman has been making mind blowingly cool movies for almost sixty years. His bizarre and incredible films were around before Elvis Presley had a hit or Disneyland existed. He produced more than three dozen drive-in classics like The Wasp Woman, Teen-Age Caveman and Attack of the Crab Monsters before JFK was elected, and at 85, put at least six more in the can this year. The perpetual awesome machine that is Roger Corman is the subject of an exciting and moving new documentary out this week. Corman’s World : Exploits of a Hollywood Rebel reunites the stock players and future superstars (his posse and fan club includes Jack Nicholson, Martin Scorsese and Ron Howard) that brought classic fantasies like Grand Theft Auto and Boxcar Bertha to life. Corman will appear in-person at the Nuart on Friday night with director Alex Stapleton for a Q&A Session after the screening. Raise your hand and ask a question. I’d like to hear the Oscar-winner explain the physiological differences between a Sharktopus, a Piranhaconda (Facebook interests: Eating people, battling Sharktopus, eating more people) and a Scorpius Gigantus.