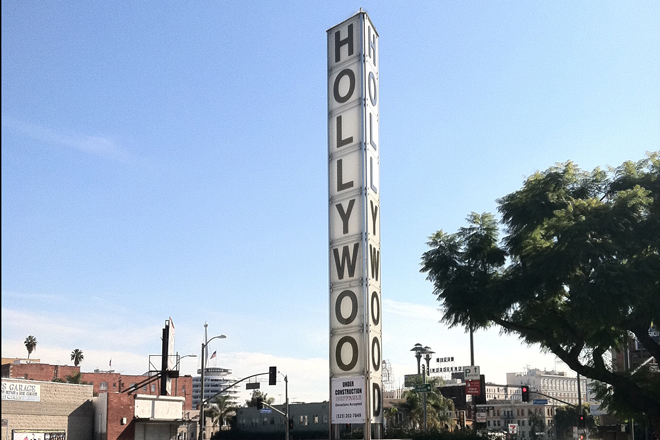 It’s not quite as big as the one on the hill, but the thirty feet of glass and steel spelling out “HOLLYWOOD” at Cahuenga and Yucca is still pretty noticeable and has been a beacon to drivers looking for the 101 freeway since it was installed by the Yucca Corridor Coalition in 2005. The sign sits on a large median and was originally meant to have a fountain, native landscaping, and a fiber optic light show. Six years later the sign has four missing letters, a destroyed electrical system and dead plants. Hollywood native David Wexler owns a film vault nearby and wanted to help. He reached into his own pocket and started hitting up friends in the neighborhood to spruce up the forlorn landmark, raising more than $10,000 to pay for a new meter, LED lights and new trees and shrubs. He’s hoping to raise $75,000 for a complete makeover. “It’s my pet project at the moment” says Wexler. “It would be nice if some of the big hotels or nightclub owners or entertainment folks Hollywood has been good to would respond.”