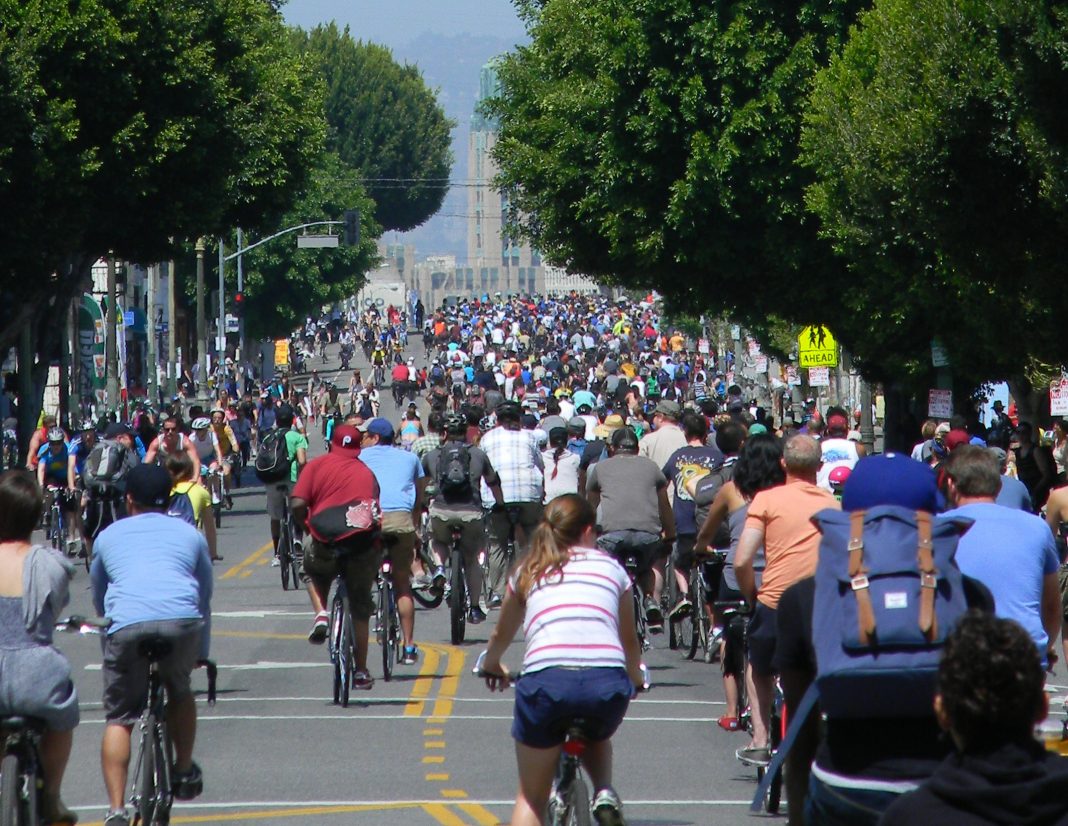 The next installment of CicLAvia, the car-free day celebrating bikes and pedestrians, arrives on Sunday, December 7th. Previous excursions have visited Echo Park, Boyle Heights, and the Miracle Mile. This time the group is heading south to Central Avenue and Leimert Park. Here is my guide to historical, cultural, and culinary landmarks along the way. Pack a helmet, a camera, and a bib. 1.) First McDonald’s in Los Angeles (now Tacos el Gavilan)
1900 S. Central Ave.
Los Angeles residents tasted their first McDonald’s hamburger at this red-and-white tiled stand in 1957. The McDonald brothers themselves sold the franchise for this roadside icon designed by architect Stanley Meston. The world’s oldest McDonald’s still stands a few miles east from here in Downey. The owners seek to demolish this building for a larger taco stand, so see it while you can. 2.) Lincoln Theater (now Iglesia de Jesucristo Judá)
2300 S. Central Ave.
This gigantic Moorish Revival movie palace was built in 1927 and seats 2100 patrons. The theater, known as the “West Coast Apollo” once hosted acts including Lena Horne, Duke Ellington, and Nat “King” Cole. It has been a church for more than 50 years. It’s a Sunday, maybe you can peek inside. 3.) 28th Street Apartments (Formerly 28th St. YMCA)
1006 E. 28th Street
One block west of the route on 28th Street is a fantastic 1926 YMCA building designed by Paul R. Williams, the first African-American fellow of the American Institute of Architects. The gym was restored in 2012 as affordable housing and now features an addition by Koning Eizenberg. 4.) Dunbar Hotel
4225 Central Ave.
The Dunbar was the social center of the African-American community in the 1930s and 40s. The five-story brick hotel was the anchor of a neighborhood of jazz nightclubs including The Last Word and Club Alabam. 6.) Thomas Jefferson High School
1319 E 41st St.
If it hadn’t been for the destructive Long Beach earthquake of 1933, we never would have had Stiles O. Clements’s incredible 1937 Streamline Moderne Thomas Jefferson High School. The smooth lines of the super cool school must have rubbed off on students like Alvin Ailey, Dorothy Dandridge, and Scooby Doo designer Iwao Takamoto. 7.) Unified Grocers
457 East Martin Luther King Blvd.
More than 100 years ago, a baker named George Gordon built a plant that would become part of Unified Grocers, the second largest private company in Los Angeles according to the Los Angeles Business Journal. The milk processing plant and full-service bakery on the site continue to produce goods for independent markets throughout Southern California. 8.) Bill’s Taco House
219 E. Martin Luther King Jr. Blvd.
Hamburger patties, chili gravy, and a signed photo of Barry White don’t sound like they belong in a taco house, but Bill’s has had a loyal following since 1949. The jukebox hums from 10:30 to 6 on Sundays. 10.) Mercado La Paloma
3655 S. Grand Ave.
A few blocks north of the route is a former warehouse converted into an indoor marketplace, with shops, restaurants, and meeting rooms for local non-profits. Mercado La Paloma features art objects from the Yucatan and Oaxaca, and more than a half-dozen restaurants (Mo-Chica was born here) with cuisines ranging from Vegan Ethiopian, to Thai, to Michoacán. 11.) Exposition Park
700 State Drive
Almost as big as Disneyland, and with a history that spans 140 years, Exposition Park deserves an entire day on it’s own. Everything from dinosaurs to the space shuttle resides in the museums here, and the architecture ranges from Beaux Arts to Frank Gehry. This is where two Olympics were held, where John F. Kennedy was nominated for president, and it’s where the Dodgers won the World Series. 12.) Manual Arts High School
4131 South Vermont Ave.
A Streamline Moderne High School by John and Donald Parkinson wearing an overlay of 21st century Street art by well known artists from around the world. Belgian artist ROA created some pretty incredible and massive mammals on the gymnasium exterior near the corner of 42nd and Vermont. 13.) Touriel Medical Building
2610 West Martin Luther King Jr. Bl.
Architectural photographer Julius Shulman knew every modern architect in town when he selected Raphael Soriano to design his own home in 1950. That was the year Soriano completed the this small office, which historian Robert Winter described as a “steel frame post and beam building with a small entrance courtyard that carries the Arts & Architecture Case Study House aesthetic into the commercial realm.” Today it wears a coat of rough stucco and is being used as a marijuana dispensary. 15.) Leimert Park Village
3341 W. 43rd Place
Walter Leimert turned 231 acres of dairy farm into the planned community of Leimert Park in 1928. Mostly Spanish-style homes were built around a shopping plaza and park designed by the Olmsted Brothers. Today, the village is home to the music space World Stage, Eso Won bookstore, and the Blackstreet, U.S.A. Puppet Theater. The art deco Vision Theater is the restored centerpiece of the neighborhood.