Home Entertainment Industry Happy Back to the Future Day! Here Are 1.21 Giga-Ways to Celebrate 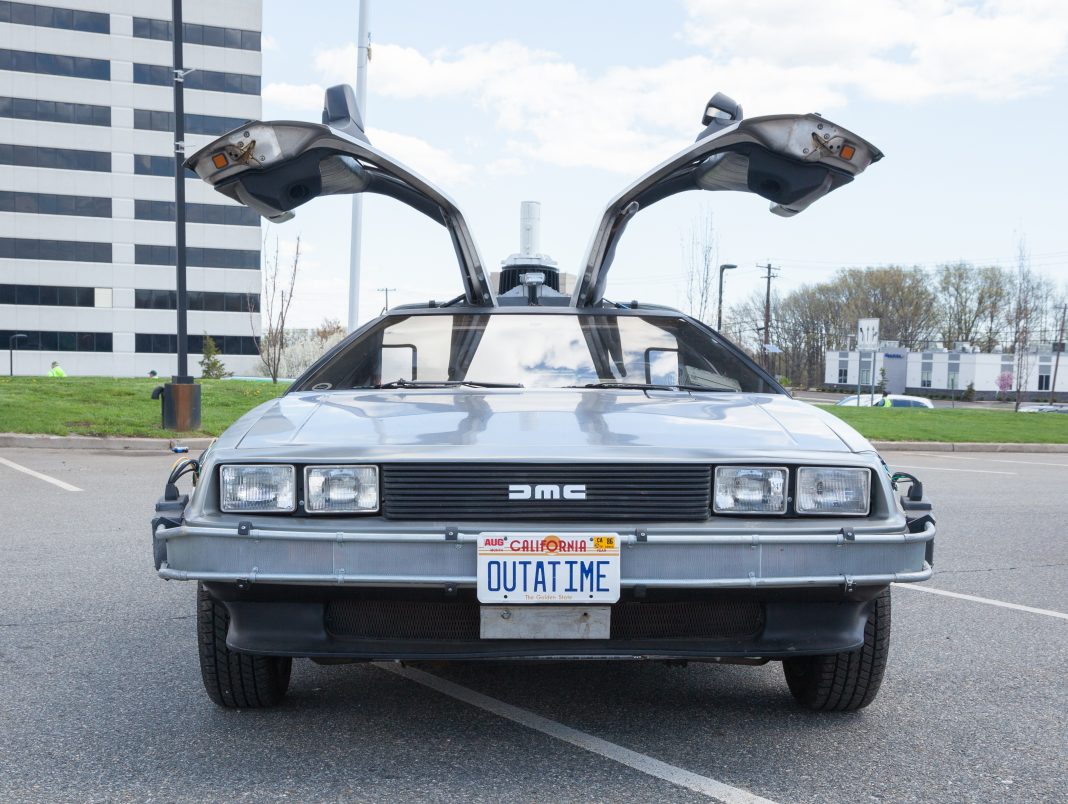 Today is Back to the Future Day. In the second movie, Doc Brown sets the time machine to arrive at the distant date of October 21, 2015, and now that that date has arrived,  fans are celebrating all over the world. We still don’t have Flux Capacitors, and hoverboards are iffy, but Toyota has Michael J. Fox and Christopher Lloyd promoting their garbage-powered car and Nike gave Fox a pair of those self-lacing sneakers today.

I was excited about the film before it came out. I grew up near the Puente Hills Mall and was thrilled to see Polaroids my classmates brought back from the set the day after filming. My first car was a 1953 Plymouth seen in the film (Marty watches gas station attendants descend on it when he first arrives in 1955) and yes, I am wearing two ties today.

Hill Valley is in California, so we have a special duty to commemorate the film in a big way. Here are 21 places to celebrate.

1. Automata Arts in Chinatown is showcasing the artist collective Mothership with their recycled vintage electronics, choreography, and a “spacial warp” by Alex Gaines as part of the Live Arts Exchange Festival

2. The “radical 80s tribute” at Spike’s Bar in Rosemead features a live performance by Flashbax and a tribute to the late Lux Interior from The Cramps.

4. Comic artist Karl Altstaetter will be signing special covers of a new Back to the Future comic released today at Geoffrey’s Comics in Gardena.

6. The downtown bar Salvage is hosting a night of acoustic music from the Back to the Future soundtrack.

7. Swing House Studios is hosting a party with a costume contest, green screen shenanigans, and a “live karaoke” band.

8. The street where Marty’s mother Lorraine (and her peeping Tom) lived was filmed in a quiet neighborhood in South Pasadena. Tonight the Los Angeles Scotch Club is hosting a Marty McFlight of rare spirits in one of the historic homes seen in the film.

9. Can you believe there are two DeLorean charter services? Time Machine Car and Doc Brown’s Time Machine Rentals have Doc’s ride for rent.

10. Michael J. Fox and Huey Lewis are Jimmy Kimmel’s guests tonight. That would usually mean a free concert on Hollywood Boulevard, but the show is broadcasting from Brooklyn this week, so you’ll have to organize your own viewing party.

11. Smog City Brewing in Torrance is hosting a party with screenings and a new brew dubbed the 1.21 Gigawatts Triple IPA.

12. We can’t predict how many men will show up at the Burbank Burger King in jeans and an orange vest, but those that do will join the Million McFly March to benefit Michael J. Fox Foundation.

13. There are only a handful of bottles, but Rocket Fizz in Westwood has a waiting list for Pepsi Perfect.

14. The theme of this year’s Designer Con pop art fair is “Back to the 80s” and will feature an exhibition of the private Back to the Future art collection of founder Ben Goretsky.

15. Bucolic Bushnell Street in South Pasadena was used for several scenes in the movie and is now the subject of a new documentary short.

17. The most ambitious celebration is the multi-day “We’re Going Back” extravaganza which today offers a custom tour of the Universal backlot, a visit with the actual “hero” time machine from the movie, and the premiere of the documentary Out Of Time: Saving the DeLorean Time Machine.

18. All three films will screen at the Chinese Theater in Hollywood, newly upgraded with an IMAX laser projector. How 2015!

19. Doc Brown’s truck has been parked at the Twin Pines Mall, I mean the Puente Hills Mall in the City of Industry, for weeks. Today it is joined by a replica “Twin Pines Mall” sign, a display of movie memorabilia, and a screening at the nearby AMC 20 Theater.

20. Amoeba Music is sold out of the deluxe two-sided vinyl picture disc of Alan Silvestri’s soundtrack for the film but expects more next week.

21. “We’re Going Back” is back on Saturday night presenting the Enchantment Under the Sea dance at the original filming location in Hollywood.

#TBT: Limos Were the Symbol of L.A. Luxury