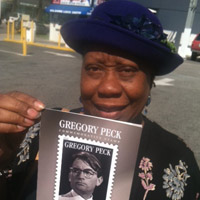 The United States Postal Service issued a “forever” stamp yesterday honoring the late movie legend Gregory Peck. The festivities were held at the Academy of Motion Picture Arts and Sciences in Beverly Hills. I like the guy that played Atticus Finch as much as the next fella, but was moved when I ran into friends who had just come from the ceremony. They were overwhelmed with affection and excitement and had taken the day off to pay tribute to the actor. Steve Partida and Alline Merchant (pictured) told me about Morgan Freeman’s first meeting with Peck where he kneeled before the star, about remembrances from Sidney Poitier and Sharon Stone and Jimmy Smits, how the widows of Peck and his To Kill A Mockingbird co-star Brock Peters appeared together. In a nod to the reason everyone was gathered, Peck’s longtime mail carrier even gave a moving speech. Be sure to save the next letter you receive from me, it’ll have a Gregory Peck stamp attached.