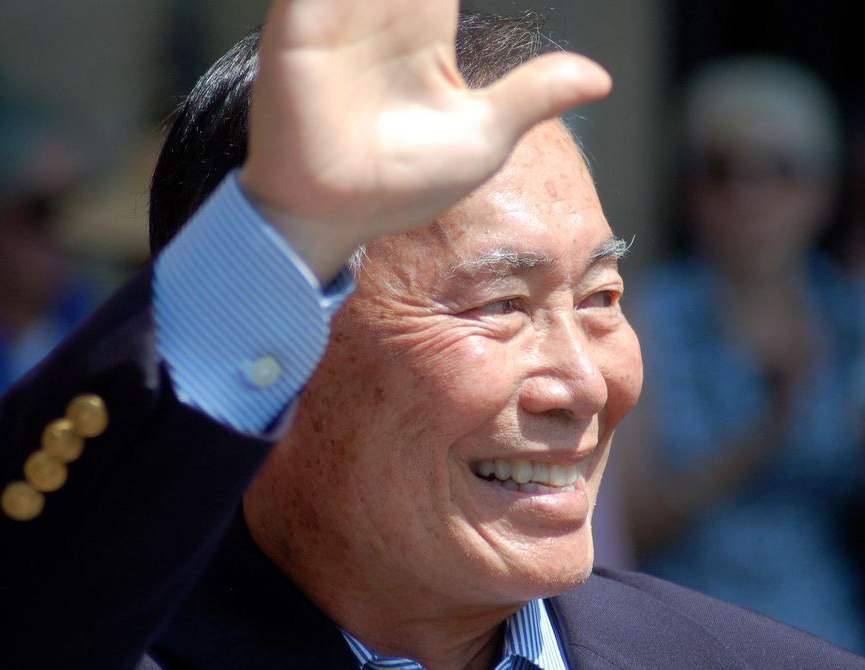 This past weekend was one of commemoration in Little Tokyo. Seventy years ago this week World War II was ending in Europe, though fighting raged on in the Pacific. Most Americans of Japanese ancestry were isolated in internment camps, but more than 16,000 fought in the United States Army. Last Friday, Japanese Prime Minister Shinzo Abe visited Los Angeles and laid a floral wreath at Little Tokyo’s “Go For Broke” monument, which honors these soldiers (a quote from President Harry Truman is engraved into the “Go For Broke” war memorial: “You not only fought the enemy. . . you fought prejudice and won”). The black granite marker is located just north of the Japanese American National Museum, which on Saturday honored actor George Takei with their lifetime achievement medal. Takei and his family were detained at the Tule Lake Relocation Center for four years during the war. His story inspired the Broadway musical Allegiance. On Saturday night, Takei announced that he had negotiated a deal to save a historic collection of artifacts created by Japanese-Americans in the camps from being auctioned. Takei made a donation and negotiated the sale to the museum. But the remembrances don’t end there. The US Air Force Band is performing a free concert at the Carpenter Center in Long Beach to commemorate the service of Japanese-American veterans who served during WWII on May 18. Forty performers will debut a new song dedicated to the military men.

Let’s give a big hand to George Takei and a salute to the “Go For Broke” vets.

UPDATE: Saturday’s DTLA Explosion Is the Subject of a ‘Significant’ Arson Investigation

Meet the Guy Bringing Japanese Dance Music and Hip-Hop to an L.A. Audience

For Artist Mark Nagata, Toys Became a Connection to His Japanese Heritage